Normally religion doesn’t get much attention here on citizenreporter. Probably because I’m not a religious person.? Nevertheless my recommendation for you today is related to faith and preachers and yes.. evangelicals.. a group I really never pay attention to. 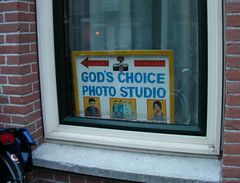 This evening I found myself on a train, coming home from Brussels, mind wandering… and sure enough I turn on This American Life.? This episode focuses on a preacher, an evangelical preacher who went from being a superstar to being a pariah among his own people.? But its not the rise and fall that caught my attention. It is the man’s voice, in the interviews and in church… his voice keeps me captivated.. its magic. It doesn’t make me suddenly religious.. but it does make me think about life and friends and love and how things change.? Plus its a story that just hangs there in my mind.? Therefore I recommend giving it a listen.

Remind me to visit the staff of Radio Netherlands and buy everyone at The State We’re In a drink. Week in and week out the crew produces excellent audio programs on topics related to human rights and human wrongs.

In their latest program they hit yet another homerun with a segment that just reached out and grabbed me; forgiveness.

While I was raised in a fairly religious family, I myself don’t have a religion, nor do I want one.  But one of those lessons many religions seem to try to teach people, is the importance of forgiveness.  Throughout the world there are so many terrible conflicts… and when these conflicts end… if they are really to end.. forgiveness seems to me a very essential stage.  Yet after many conflicts you don’t often see that many truth and reconciliation processes.

In their latest program, The State We’re In speaks with someone from the Forgiveness Project, which is all about understanding and inspiring forgiveness. And later in the program they go to a park in South Africa, know as Freedom Park, which is dedicated to the idea of forgiveness; a place where people (victim or perpetrator) can tell their stories and make amends.

I highly recommend you listen to this segment, and the program in general. If there’s one thing the world could use more of, it is forgiveness.

It is certainly no new discovery, but as you can see from my vlog entry about the far-right demonstration in Brussels, a sure way to get people commenting and yelling (well not really yelling) at you is to defend people’s right to be muslim. So while I’ve lots of other issues I’d like to bring up, I’ll first come back to this one. And I should mention I do appreciate all comments and I especially appreciate criticism and debate that is carried out in such a way that is not insulting or name calling, but rather about saying I disagree, and here is why. So thanks to all of you who continue to do that.

There were a great deal of comments, including some heartfelt ones from a good friend in Chicago who is originally from Lebanon. (hi dear!) The underlying theme was that I shouldn’t be so in favor of welcoming all things islam into the social and political stage in Europe because, as many people insisted, it is a religion that seeks the joining of church and state, that excludes women, that refuses democratic principles etc, etc.

Now I must state here, because going any further, I don’t claim to know the muslim faith. I’ve never read the Koran or lived in a country where it was the dominant religion. So I don’t honestly know how it all works and what the ultimate goals are, etc. Some of you say you do, and that is good, I’m a big believer in learning, researching for yourself and understanding. All I do is study history, closely observe the present, and learn from my interraction with those in my daily life who I know are of the muslim faith, most of whom I have a great deal of admiration and respect for as kind and honest humans trying to live their lives.

>Here comes something I rarely reveal on the blog, overall, religions and their power over people, scare me. All of them. Places of worship, religious leaders, the artifacts and traditions in general.. I don’t much care for them. HOWEVER. I realize that lots of people do. I see the importance they have in people’s lives, the positive aspects, and I try to respect that. I have a curiosity and a desire to learn from the past, including time honored traditions… because maybe many of them have something to teach us. There are plenty of traditions that I don’t like, and even some I would consider flat out wrong, where humans are tortured or killed for example… I try to draw a line there. You might draw the line somewhere else altogether… fine.

But here’s my little conclusion for today. Generally speaking, the greater the amount of poverty, desperation, and lack of education, the higher the level of religiousity and especially of the irrational fundamentalist kind. In many countries in Europe we see empty churches and few people willing to go to war on the whims of the pope or if someone insults the Catholic or Protestant faith. But a few hundred years ago, those two religions wielded tremendous power and did terrible things in the name of their god. So when people start touting all the dangers and problems of the growth of another religion in Europe, I don’t see it that way. Rather than talking about stopping or in some way stemming the growth or influence of islam in Europe, why not look at the conditions people live in, especially in terms of economics and social mobility. Are people from certain countries really seen as equals and able to have the same access to power and wealth as the “native” population? Are we doing all we can to provide a solid education and social services to people regardless of what neighborhood they live in or their class? I say, learn from history, address these issues, and no matter what your background or your religion, Europe will have a bright future, with civil and healthy disagreement and debate.

Lessons from the Amish

Part of having a little office/studio space in an old squat means that I have to clock working hours on the actual building. Thankfully hammering, scraping, or painting are all tasks that allow me the mental freedom to listen to my favorite podcasts all day long.. stopping for the occasional watermelon break.

Today’s audio gem which I strongly recommend comes from On Point, with Tom Ashbrooke. Always a great program, the most recent episode focuses on the Amish population of the United States. It features an author who spent many years living next door to Amish, getting to know them and becoming good friends. He did extensive research about different Amish communities and provides some really eye opening information about them… what I would label as both positive and negative details.

One particular detail that opened my eyes was the fact that Amish communities, especially some of the most conservative ones, have seen population BOOMS in the last decade… more than doubling their numbers!
– Imagine that… living in the US, while all these non-amishpeople, media, objects, not too far from your home.. and yet.. a whole community not only staying out of much of it.. but actually growing!

Beyond that he presents important lessons that the amish could offer the rest of the world.. including: buying and selling local. He talks about their tremendous skill and capacity for farming, and the great tradition of selling locally, to communities down the street. Now of course he talks about issues of education and patriarchy which present some troubling realities… but overall I was very impressed with what he learned about the Amish.