“It is hard to speak without any emotion about a conflict when you live it,” a great new friend and journalist explains to me as we drive across busy Tbilisi on a Friday night.  “I can talk about Kosovo, Iraq, without getting emotional, but this… its so complicated and has such an impact on my life,” he struggles to find the words to explain why the long standing conflict between Russia and Georgia, especially the 2008 war, is so hard to address and explain without getting angry or frustrated.

Police in Tbilisi sitting around.

It is this complexity that I have brought up, or seems to come up, quite often in the comings and goings of a visiting foreign citizen journalist. I’ve gotten to hear about the experiences of people here, what they were doing to keep safe and protect their loved ones while their home city was being bombed from above.  I listen to the stories and then I walk down to a local café with fancy named drinks and free wifi, I struggle to imagine bombs raining down anywhere near this place.  Why would anyone agree to do that? Who pushes that button, and goes on with life?

I’m simplifying war, which my wise friend reminds me in words, is more possible when you haven’t lived that war.  But I do it because I have studied and I continue to study the world. In my observations and studying I have witnessed that most irreconcilable differences are reconcilable. Most conflicts are created, orchestrated, and inflated by political and military leaders. And beyond who creates the conflict, it is we the citizens of the world who carry out the gruesome inhumane task of trying to destroy one another. Without our cooperation, our hands at the controls, our fingers on the triggers, most wars could not be fought.  Even a drone has a pilot somewhere, who is consciously carrying out a task relating to war.

So now for the impossible. Where I lose you because what I invision is considered impossible… even though in terms of our abilities as humans and our collective power… it is physically and mentally possible to do.  That is to refuse.  Refuse to line up for war. Refuse to pull the trigger. And perhaps most importantly, refuse to believe what you’re told about the mission; that those people over that line deserve to die and that you’re right for carrying out orders to harm them.  -OF course- this means both sides. This only works with a cross border, cross cultural, out pouring of some of the greatest bravery the world has ever seen. That two militaries would refuse to take aim at each other.  What a beautifully boring war it would be.

ctrp335 At the Russia-Mongolia Border

A short podcast from the Russia-Mongolia border. As it takes about 3 hours to clear Russian customs, and more than 1 hour to clear Mongolian customs, I decided to get out and record some observations and thoughts especially in regards to the first two weeks in Siberia. You’ll also hear me briefly interrupted by the arrival of a battalion of Russian border guards.

When you wander around the streets of Tomsk in Siberia, you may think the place looks a little behind the times. But beneath the surface there are in fact new and creative ideas in the world of new media taking root. In this particular podcast we hear from a videoblogging priest about why he uses the internet as a tool in his community, and how some young DJ’s have turned to internet radio as their main stage for playing music. (special bonus at the end, me ringing the church bells, I apologize in advance to your ears.)

The church’s Videoblog (where I, though not religious,  might appear soon) 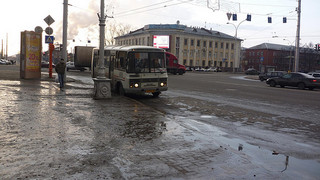