I recently gave a talk at the Chaos Communication Camp on the subject of New Orleans and the Federal Flood; a mix of my observations and research combined with all that I’ve learned from the many excellent NOLA bloggers. After the talk Rob Savoye walked up to me with lots of kind words, and explained that he was there in the days following the storm, working to give people medical care, food, and shelter. This podcast features his story. (recorded as the CCC was being dismantled around us)

We discuss:
– His work as a search and rescue volunteer
– When Katrina hit, the decision to go
– First contact with victims and authorities
– Intimidation versus encouragement from different authorities
– Day to day tasks
– The importance of communication and art
– Keeping America interested
– How Rainbow families works
– The mainstream media
– Future disaster relief preparation 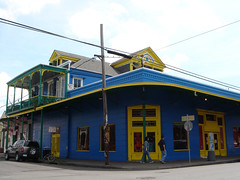 While I may have spent alot of time and energy going to New Orleans and getting into contact with organizations and volunteers to better understand the situation there, some of the best resources are right here on the internets. I’m speaking of the New Orleans bloggers, those keen observers and investigative reporters for the laundry list of concerns in their city. This program features two excellent bloggers from that community, The Gentilly Girl and Ray in New Orleans. Listen in as we discuss:

-Where is the money?
-What has been rebuilt/not rebuilt and why
-Jobs
-Housing
-Mismanagement of funds
-The Pumps scandal
-Israeli military personnel
-Police
-Abandoned homes and laws
-What needs to be done immediately