More talk of soy and the soy industry. 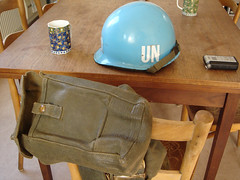 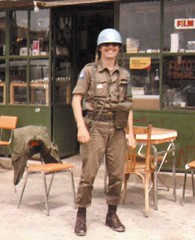 Meanwhile, on the Streets of Beirut

It would be nice to just continue to describe these days in Italy. And the plan to head to Slovenia tomorrow evening. But while I stroll and take photos, things are taking a terrible turn in Lebanon.

At a little café here in Verona, we stopped to get lunch, and I flipped through the local newspaper. Right there on the front page: ITALIAN SOLDIERS STATIONED IN LEBANON PREPARE FOR THE WORST. With a subtext about the build up to a civil war.

I’m not going to sit here and predict or expound upon the coming or not-coming of a civil war. I’d rather just say I hope it is not so. I hope it does not happen. But then again, when your country has been bombed into the stone age just recently, after having been bombed into the bronze age only years ago, then conditions are not exactly perfect for maintaining calm and fostering prosperity.

This comes as I noticed last night that the UN released a report siting numerous human rights violations by the Israeli military during their invasion of the country. Not that we needed a report, usually when you invade a country you’re already violating quite a few rights.

My authority on all things Lebanon has long been Chris Albritton, the original blog journalist, in my eyes. But I’ll also keep an eye on my dear friends at This Is Beirut, hopefully proper information can be put forth while a civil war will NOT happen. Hopefully.

21 people have died and over 100 have been injured as a result of cluster bombs left over from the Israeli invasion and bombing of Lebanon over the summer. I was just reading yet another report about it. DemocracyNow had also mentioned last week that Hezbollah had used cluster ammunition. We know that the US has used cluster bombs at various times during their invasion of Iraq. I was also recently informed that the Dutch military owns cluster bombs for an unknown purpose.

Cluster bombs. What useful purpose could such a thing serve, as if bombs themselves weren’t destructive enough. Apparently the chance to have tiny bomblets drop everywhere and blow up later is an appealing thing for all these armies.

It is indeed a crime against humanity, if not a war crime, when these bombs are used and then days, months, and years later, civilians are blown up when they happen to encounter an unexploded cluster bomb. This recent story in Lebanon was of children picking olives in an orchard.

Besides the obvious condemning of each of the above mentioned governments, as well as any nation that owns cluster bombs, there are more guilty parties out there. Specifically, the companies that produce these bombs and make big money selling them. They include: General Dynamics Corp, L3 Communications Holdings Inc, Raytheon Co, Lockheed Martin Corp, Alliant Techsystems Inc, EADS Co (European Aeronautic Defense and Space Company) and Thales SA. All of these companies should face charges for their role in international crimes; producing weapons that have no defensive use and are known to be uncontrollably destructive.

Now that I made that list, not only am I outraged but I’m also ashamed that so many companies are involved in producing such a terrible weapon.