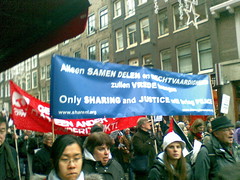 Smile As You Destroy Their Democracy

There list of hypocracies and deadly inconsistancies continues to grow between Israel and Palestine. On this blog I’ve been very vocal at the distress I felt seeing the international community demand elections in Palestine, and then slapping them with financial and political penalties for party…