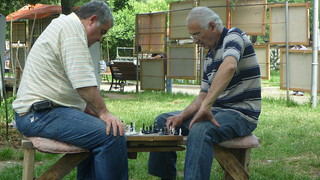 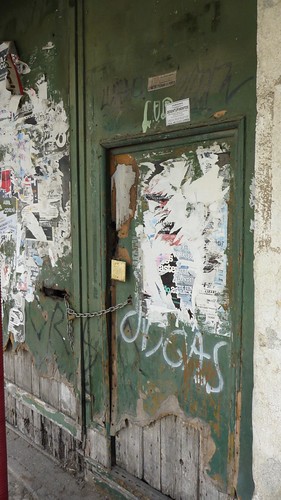 Thats how it feels when everywhere you turn there are victims of some rapidly spreading phenomenon that leaves dispair and suffering in its wake.  Here in Lisbon the headlines read “Nation Reduces Its Deficit By 22%” with a sort of pride; the demands of the global bankers are being met.  But if you flip the pages of the newspaper, talk to the taxi driver, or the women on her way to work in Lisbon this morning, you’ll hear the painful details: Energy company privatized, raising prices by 30% next year.  Most salaries in public and private sector slashed by 8% and higher. Elimination of holiday pay, a yearly bit of income most mid and low income families count on to get by. Government programs for career development, cut. – Everywhere you look it is the average citizen, who for decades has survived on one of the lowest wages in Europe, that now literally pays to get the government out of its massive financial hole.

Somehow the bankers, governments, and many citizens in the rest of Europe will call it a success if Portugal manages to keep reducing its deficit. Many of the same people who,  over the past decade, helped plunge the country into its current crisis. The government in Brussels and here in Lisbon will probably pat itself on the back when the good numbers are announced in a few months or (more likely) years.

But what is left of a nation when everything has been cut or sold, and people have been squeezed to a breaking point?

I digress, this is not supposed to be a list of what does or doesn’t need to be done to save Portugal or save the Portuguese economy. This is an open question about the working of the global and European economy. About how we measure what is good and what is bad. While government and financial leaders act as if this is the medicine to cure the country of its ills, they bleed and beat the country through their actions. No I suppose not literally, but if you look around, there is a country full of afflicted people here.

The Battle of Athens

It is neither the first nor the last battle on the streets of Athens this year. But today is the day the public has surrounded parliament as the government tries to pass more measures to cut costs, jobs, services, etc, in order to address the mind-blowing debt the country has.  Surely there are more details and larger discussions to have around these issues, but right now it all pales in comparison to what is happening on the streets.

To get updates from Syntagma Square, journalists and frequent guests on citizenreporter, Max and Stacy are on the scene.  Of course Al Jazeera also has the streaming images and people in the crowds. 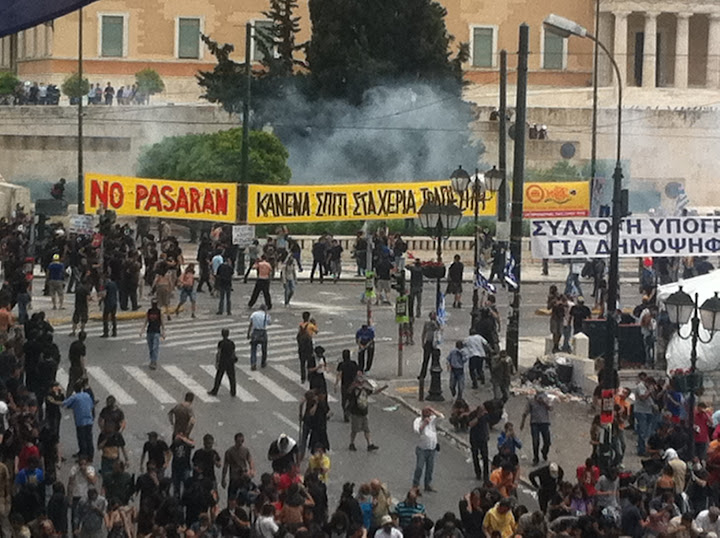 One key point that I didn’t manage to get into for the piece I wrote about Portugal on the Guardian -Comment is Free– a few weeks ago:

Although Portugal has never really seen an economic boom on the same scale of many of its European neighbors like Ireland and Spain, there was a period in the late 90’s when the economy was seen as doing quite well.  One of the big measures of this success, the number of multinational corporations that opened a production facility or large regional office in the country.  Employing lots of people and in theory, contributing tax income for the benefit of every citizen.

In 2001-2002, when I worked in Linda-a-Velha, just outside Lisbon, every morning my bus would pass all the big names that many nations would be excited to have within their borders: Nestlé, Ford, Volkswagon, Agfa, Kodak, Microsoft, Cisco and General Electric, just to name a few.  As time passed I met people who worked for these big names, noticed the long hours, hard work, and surprisingly – their uncertain futures at their current jobs.  In the years that have passed since this somewhat better economic time, it is big names like these that have repeatedly downsized, moved, and closed down their operations in Portugal.  They’ve done so with little notice and even less assistance for their laid off employees.  In their wake they left not only unemployment, they also left abandoned buildings, and communities in crisis.

So how does this make Portugal unique when so many people around the world experience such changes? A look at the statistics and the real stories of business being bought, sold, and moved somewhere even cheaper that low priced Portugal would reveal that in fact, Portugal’s strict rules and regulation of businesses does not apply to the multinationals.  Excessive roadblocks and red tape for small businesses and individuals looking to get started? – Plenty of that.  Basic commitments from large corporations such as contributions to the public well being? -Hardly any.

Now many who have been observing all this happening since the 90’s tend to blame the emergence of the European Union, with its pro-corporate policies and its excessive regulation that hits the smallest and poorest members the hardest.  Yet if you zoom out and look at the evolution of the so-called global economy, you can find other examples where some countries who want to attract foreign investment in the quest to become prosperous and modern also get used, abused, and left behind.  While the European Union has had a role to play, the symptoms that have made Portugal a very troubled economy, have alot to do with a world economy that says success means profits above all else, and short term gains trump long term sustainability.  While they harass and undermine small native initiatives, they sit back and give large multinational entities a free pass to do whatever they please.