The thermometer of the attic apartment reads 40.3C. The act of reading the temperature of the tiny digital display no doubt causes more drops of sweat to roll down my forehead. Its almost August in Lisbon and with temperatures like this when no one dares to move too quickly as a matter of health, it is no wonder the entire nation is always several steps behind much of the European Union.

Hours later, when the merciless sun has finally passed behind one of the city’s seven hills, I make my way to the cozy restaurant with wifi, where I always hold court when I am in town. I’m greeted by one of Lisbon’s busiest and kindest restaurant owner-entrepeneurs, my good friend David. He reminds me to make myself at home and I ask how is business, with my best “businesslike” tone. “Really really good actually”, he tells me with an air of satisfaction, “It has already been a great summer business wise.” David looks up motioning towards the upper floors of the building which he rents to tourists for several years now. He clears a few tables and chit-chats with various costumers in French, Spanish, Portuguese, and English, before he finally pulls up a chair to ask me about my journeys and get up to speed with my offline life.

Outside the night air is still hot and people move slowly through the beloved streets of the Bairro Alto. They love to talk about how bad the economy is here, they being my fellow Portuguese citizens. Yet when I look around, I see people everywhere, walking, eating, photographing, talking business on the phone, opening up another bizarre pseudo-clothing shop-bar-club.

Alas I love Lisbon and I was once an urban anthropologist in this town, my hours of study were between 11pm and 6am. But now I am an outsider, observing and enjoying still, but out of touch with what is what for the people of this proud city. Then again, I was probably always an outsider. 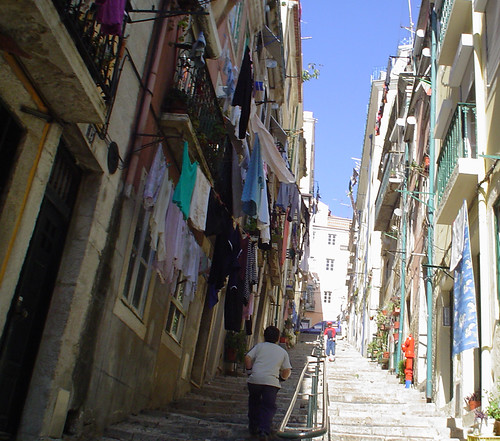