When Theres No More Belgium 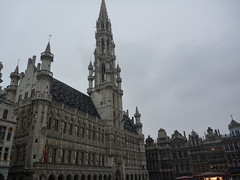 Over the past 10 years, besides regularly visiting friends and family, I have taken countless train rides through and around Belgium.  Looking out the window from the quiet and comfortable SNCB trains at the beautiful green fields that stretch as far as the eye can see. Not quite as perfect and manicured as the Netherlands, not quite as spacious as France, no one could argue that in any part of Belgium there is great beauty to be seen and experienced.  This beauty extends beyond a nice looking bit of scenery, as this small nation is in many ways the heart of Europe, multicultural and multilingual, having overcome a sad history of wars and conflicts to build a country that at the very least, has achieved a quality of life for the average person that other people throughout the world can only dream of.

Problems? Sure they’ve got a fine list of economic, social, and political problems. Some that seem to get worse (like the national debt), some that are just made to sound worse by leaders who benefit from fear, anger, or some other form of rabid regional patriotism.

Even with these problems, the nation is still has a long list of successes and virtues, that would be the envy of pretty much any other continent on the planet.  Take any sector, from health to agriculture, to science and beyond, you’ll find plenty of achievements in Belgium.

Despite all this, we still sit ever closer to what seems like the break up of the nation. With every passing election, it feels like a loud majority have forgotten what a great place they live in, and all that they have in common with their neighbors.  Instead they believe the solution to all their problems will come with the end of Belgium. Putting an end to one of the most unique and beautiful nations the world has ever known.

On line at the grocery store, I read the big sign in the window: Seeking new colleagues to join our team.? Around the block at the caf? there’s a small paper in the window that reads: seeking wait staff.? The restaurant next door is full to the brim with customers everyday and employs only 2 servers and 1 cook, the entire staff looks overwhelmed.

No matter where I look in the service industry, the Netherlands seems to be lacking workers. Yet at the same time, I can think of many university students who would never take such jobs.? I’m also reminded of my fellow university graduates who are seeking work in the field of their studies and would not take up work in a restaurant or a grocery store.

All this to make the un-scientific observation that there could be some type of labor shortage in this part of Europe. And it is getting worse.

Meanwhile I read about the situation of detained refugees in Belgium, who are currently on hunger strike.? Belgium’s politics and economic reality is certainly not identical to the Netherlands, but I still think it says something about where this entire region is within the discussion of the right to work and immigration policy. For the neverending obsession with keeping people out, I’m wondering who they’re going to turn to when no one in the country will take essential jobs.

I have experienced few more beautiful things than the simple act of sitting next to my mom and cousin as they go through black and white photos from their past in Portugal. Hilarious stories, sad stories, political stories, mysterious stories; I try to make mental notes and the occasional audio-visual recording of each one.

Recording or no recording, being in the room while these two reminisce… that’s what I’ve been enjoying most recently.