Life wisdom comes from unexpected places at unexpected times. On one particular evening I was making my way from Abu Dhabi to Dubai and I found myself seated next to Mr. AJ from Nepal, a taxi driver-philosopher-extraordinaire.  As I got into the car I asked how is life? and his immediate response was, “I am a bad man, I have wasted my life chasing money.”  I knew right there, this was going to be an interesting ride.

Making a life in Nepal has become more and more difficult over the past 20 years and as a result, hundreds of thousands of Nepalese are now working outside the country and sending money home to family members. They can be found in countries like Kuwait, Bahrain, Oman, the UAE, and until recently Saudi Arabia. Mr. AJ has tried working in many of these countries but a combination ofhostile politics and racism would eventually land him in Abu Dhabi, a place he doesn’t love, but has come to understand.  At the age of 36 he has arrived at a life altering realization, all these years spent “chasing money”, away from his family and the people he loves, have been wasted. The pursuit of material things has led him to the conclusion that he and many people like him have been focusing on the wrong things in life. What is needed to find true satisfaction and happiness, Mr. AJ explains, “is to either help someone or grow something.”

During this long car ride we talked at length about what humans are doing with this planet and with their lives, and what could be done to improve things, and what we as individuals will do in the coming years in an effort to reach that happy place so many of us wish for.  It’s an example of taxicab wisdom at its best and a great example of why I wanted to do this series in the first place.

Ali Al Saloom, better known on the internet as Ask Ali, came on the scene in the same way many of us podcasters, bloggers, and other independent content creators did over the past 10 years; with an idea and a dream.  His goal, to teach the world about his people and his culture, to dispel myths and contribute factual information about the UAE.  The result: thousands of published answers to all kinds of questions about the UAE, a successful cultural consultancy service, and an internationally recognized representative of a country and a culture that until recently were little known or poorly understood

A pioneer in both new media and internet outreach, Ali can run down the list of reasons people around the world are coming to this region and he is proud of what his nation has accomplished. At the same time he sees the risks and responsibilities that come with success and wealth, as he talks about the things that concern him in the near future.

While much of my journey has been about taxi drivers and the wisdom they can share about this place and life as a whole, a conversation with Ali Al Saloom provides a rare chance to hear from a citizen of this nation and to learn from his unique experience.

Things You See in an Abu Dhabi Courthouse 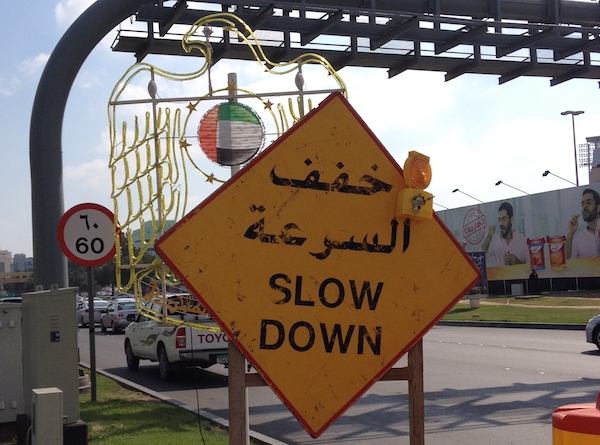 It is a Wednesday morning in the main courthouse of Abu Dhabi. Outside the Judiciary building there are hordes of people standing around smoking, talking on the phone, waiting around nervously. Their clothes are as diverse as their faces, with the familiar styles of Emerati Konduras (long flowing robe topped with either a head cover wrapped around the head or position over the head and held in place with that black rope) being the more dominate choice of clothing over the western business suit. I slip passed the metal detector after surrendering my phones, my bag is filled with recording equipment but this seems to be of no interest or concern to security. After all, beyond all those involved in legal proceedings, press people are also typical visitors here. 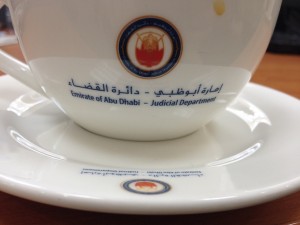 Once inside you arrive in a big square surrounded by several floors running in a circle. There are screens and signs in Arabic and English indicating things like “Bailiffs”, “Criminal Court”, “Prosecutors Office”, etc.  Again anywhere you turn there is an Emirate gentleman on a phone, often wearing a light black cloth jacket over his normal clothes, which I am told indicates this person is a lawyer.  Almost all the ladies present in the courthouse are wearing Abayas, some that cover there faces, others just covering the head. I am told even some non-Muslim ladies who come to court wear it in hopes of winning over the authorities. Every few steps there is also some kind of security officer. Many of them have unimpressive uniforms with the words “Security” on their backs, these people are often foreigners from India or Pakistan, and they speak with everyone in English. Then there are the men and women in military type uniforms, featuring golden ropes over their shoulders, camouflage type colors, and a few prestigious badges or bars on their chests.

I’m being shown around by a friend rom 7 Days Dubai, who is a regular in this place. The Philippino ladies behind the counter of the cafe greet him like a preferred customer and as we walk around different lawyers and court reporters stop us for a quick word.  As we walk by one hallway my friend gestures for me to observe carefully as there are men sitting on benches along the wall. “These men are often here because they fell into debt, which is a punishable offense in this country.” As we walk I notice these guys have a very hopeless and desperate demeanor about them, a few are even wearing leg chains, the kind you’d see a serial killer on trial in the US wearing to court.

On the way to criminal court we pass a door with two guards, and surrounding them are a mix of men and women staring nervously at the door something like when you’re at the arrivals gate of an airport waiting for someone to emerge. “These are family members hoping to see their detained loved one.” I take a second look at their concerned faces, I find myself imagining the kinds of charges their people face.  Before I can think any further about it, we’re passing through another metal detector that seems to be more of a decoration. We pass through two double doors and directly into a moderately crowded courtroom with a case already in progress. There is a panel of judges sitting behind the long, raised desk, with the middle judge, an older gentleman with dark skin and a stern look, doing all the talking.  Facing him and looking very concerned are two small podiums with middle aged men in western business suits who seem to be translating or arguing their case. 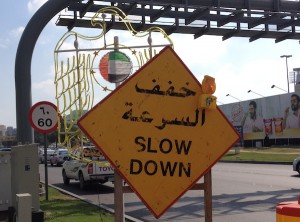 Despite having studied arabic, I’m struggling to understand what is going on. Thankfully there is a court reporter seated in our row and at the beginning of each case he gives us a quick rundown of what is going on. “This man is accused of drinking alcohol and partying,” inside the bullet proof booth I can see a short Emirati man wearing a uniform black shirt and a yellow stripe on his arm. The yellow stripe indicates a detainee facing a punishment of a year or less. Before I even understand if he is guilty or not the next case begins. The next case seems to be another man accused of drinking and partying, which makes me wonder if these aren’t the most typical charges this judge sees. This time an older woman wearing a colorful headscarf stands up in the audience and asks permission to submit some documents. Something about her somber and desperate demeanor tells me that it is her son’s freedom which hangs in the balance.  The judge shows no sympathy, but hears her out, and eventually she is returned to her seat.  15 minutes later, two short Indonesian ladies in green abayas are standing at the podium in front of the judge. Alongside them is a translator relaying messages to and from the judge. In the glass box there is a middle aged man who’s body language tells me he is very nervous. Apparently somewhere between them there is an accusation of sex outside of marriage. The discussion is long but in the end, the judge says his piece and all parties are escorted out of the room by security guards. As the two timid ladies stand outside the courtroom we follow them. A female officer slaps ankle bracelets on each of them, and they shuffle awkwardly onto the elevator. We get in just behind them and considering what we just observed, it is a struggle to keep a conversation going as the elevator heads towards the ground floor.

In the remaining time I had at the courthouse I watched everyone going about their business. To some it might seem chaotic, but in reality, my very experienced friend assures me, this is one of the most organized court systems in the Middle East.  Still it seems quite outdated, especially accusations of sex out of marriage or drinking alcohol.  Granted these things are forbidden for religious reasons, but it seems a great strain to keep them as courtroom worthy topics. Prison sentences for those who are in debt is also a troubling phenomenon.  I’m told this happens even for small sums of money and none of the men in that hall way looked like high rollers burning money on purpose. I also wondered how you pay off a debt if you are in prison.

That same day I return to Dubai after spending 24 hours in AbuDhabi and see the very down to earth, straight talking Prime Minister of the UAE Sheikh Mohammed bin Rashid Al Maktoum being interviewed on CNN. After driving the reporter out of Dubai (himself) and into the desert, he talks about the court system. He acknowledges that the system is flawed and in some ways has not yet caught up to the reality of the UAE as an open place where people from all over the world live.  Obviously he is the representative of the country and speaks with a certain degree of concern for public perception, but even still, interesting words from someone who has great influence over what happens to this country in the next 25 years.

Many of the successes of this city and this country are talked about and celebrated throughout the world. It is indeed something to behold and to some extent be inspired by. On the other hand it is important to remember there are still injustices in this country, many of which could be remedied.  One visit to a courthouse can illustrate both sides of this complicated coin.