Having Seen Life Itself 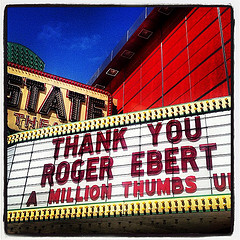 If there is one word to describe the tone of this website over the past 2 or 3 years I would choose the word “less”.  Less writing. Less podcasts. Less photos. Less activity. Less experimentation. Without knowing exactly why or when it started, I seem to have gotten busy elsewhere. Offline life? Perhaps. Work life? Often. Somewhere along the line, my little corner of the internet that is now well over 13 years old, was no longer my obsession or even my canvas. And while that may be a good thing, to focus one’s energy elsewhere on new projects. It has also at times felt like an outlet that was missing from my life and my work. A void that would surely get filled somehow over time, but I do wonder if any of it matched the magic that once was right here in this space you are reading.

An unlikely source to trigger me back into writing: Roger Ebert. If you don’t know who that is, because of course I realize the world is larger than the United States or its sometimes global cultural tentacles, Ebert was a very prolific American film critic who reviewed films for the Chicago Sun-Times for an incredible number of years. In his career he saw and reviewed thousands upon thousands of films and got many accolades for his writing. He is credited for making cinema for accessible for regular people, and shedding light on emerging talent when others would not.

Of course I had no idea about this. I had never stopped to think about who this man could be and what he was doing. As a child growing up in 1980’s and 90’s New Jersey, Siskel and Ebert were seemingly always on TV reviewing films. But I never remember wanting to watch these two verbose intellectuals in what looked like the most boring theater possible talking about films like they were on display at a museum. I think my brother and I would simply change the channel and move on, in search of something entertaining like Abbot & Costello or Cartoons! (cartoons of course, trumped everything) As I got older, of course, Ebert’s name was always there. On television, in the newspaper, on the cover of the VHS tape at the rental place.. hell .. even the movie posters on the street… it just seemed standard that his name would be there. Sometime in the 2000’s, despite that fact that I was no longer living in the US, I did take notice when Gene Siskel’s name disappeared from its traditional place under the movie title. I heard he died suddenly and I remember thinking how odd the world seemed where there would no longer be Siskel and Ebert giving thumbs up for something. But sure enough Ebert continued, his name would pop-up reviewing a film and again just like when I was a kid, I would simply move on.

Then yesterday I watched “Life Itself”, a documentary about Roger Ebert’s life and above all… his passion for it. Some would perhaps say it is a film about his love of the movies and the changes he lived through, but for me, it was really about how much he loved everything in life; films – of course, but also friends and family – such a deep love and strong bonds that endure even at his darkest moments as his body deteriorates and he prepares for the end.  This film, which I watched just out of curiosity and expecting nothing in particular, shook the core of my being. Perhaps because I remembered that child who never took notice of this person. Later, the adult, who just kept on presuming there was nothing there to be discovered or to learn about. He was right there all along, via his fantastic words, and somehow I didn’t look. Until he was gone. Until this documentary came along.

How could a documentary about a famous movie critic teach me or move me to such a degree? I think it is because I finally saw what I been blind to for so many years. That this film critic, this imperfect not-so-nice man, was in fact a fantastic guide and curious observer of the world we live in. He didn’t just observe, he put it to words, and those words had tremendous power and wisdom. The kind that you rarely come across even if you are on the look out for them. He loved how the cinema could show us hopes, aspirations, dreams, fears, or just help us share this journey called life. His journey was both a beautiful one and a particular difficult one, especially in his final years, but the daunting disease he faced was also something beautiful. Even in so much pain and under such difficult circumstances, I found it impossible to ignore the intense beauty that was this man’s existence.

A documentary alone is probably not enough to really talk like you know someone. But I’ll take that risk. As someone who writes, speaks into a mic, teaches, observes, and travels to many corners of this world, right there on my screen I found another teacher and it turns out he had been there all my life, ready if I’d ever take notice.