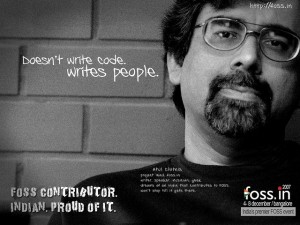 Many years ago I attended my first hacker conference in Berlin, an experience that would forever change the course of my life. During those beautiful days I met many inspiring new friends and acquaintances who’s work and life philosophies would become an important part of my online (and offline) life. One of those individuals, the great Atul Chitnis, passed away this week after a difficult and very public battle with cancer.

The truth is, I only met Atul, in person, 2 or 3 times over all these years, but every meeting was a pleasure.  He was the kind of guy who it felt like I had known my whole life, there was always something to talk about that sparked both our interests.  Despite the fact that he lived in India, and I am here in Amsterdam, through our online activities we kept in touch using what are now very familiar ways: blogs, facebook comments, twitter, and even skype.

Atul wasn’t always speaking directly to me, but his words always felt personal and insightful.  Even his infamous documenting of breakfast food, a practice I normally don’t pay attention to on social media, in the context of dealing with chemo therapy and because of the way Atul presented it, I kept up with what was cooking at his place.  I worried about his health, watched for status updates bringing good news and quietly celebrated when he posted that he was feeling pretty good.

This week I noticed I hadn’t seen any posts and that – in fact- I hadn’t seen any tweets from Atul either in quite a few days.  A terrible feeling struck me, a possibility that I wanted to shake off by going to his facebook page and seeing that all was well – maybe there would be an omelet from this morning.  Sadly, there was no omelet.  No post by Atul about how things are going. Instead, a long list of comments, each one paying tribute to their beloved friend who had passed away.

So it goes in this world. A great person can influence your life, even someone you don’t know well, they are a part of your everyday like a good neighbor, colleague at work, or a friend at the local pub.  And then everything can change.   Whatever memories you have of them will be the ones you have to hold on to.  That latest blog post becomes the last blog post. The next conference will go on, but it will be lacking its most unique and inspiring voice.

Though I realize I was not a close friend of Atul’s, I was and am a huge admirer and online friend of his. His approach to life, work, and humanity will not be forgotten, and his recorded words will serve as an example for future great minds.  I wish I could say thank you and that he would hear it now. Alas, all I can do is write, remember, and wish his family and loved ones my deepest sympathies.