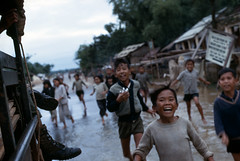 It is perhaps surprising to some regular readers/listeners of my work, but I don’t much care for the way elections and campaigns are carried out in several countries including the United States.  But don’t stop reading assuming this text is about elections, it isn’t.  It is about the words and experiences of someone less well known internationally who happens to be running in an election in the US. Words that I think should echo throughout the world and be truly understood.

His name is Bob Kerrey former Senator from Nebraska, not to be mistaken with the more well known John Kerry, Senator from Massachusetts and former presidential candidate. After a hiatus of several years, he is now once again running for Senate in the upcoming election, which is part of why I got to read a recent interview he gave and couldn’t help but re-read a few times, his experience as a soldier in the Vietnam War.  There is a contreversial story involving a mission he had some authority over, where through a series of events his team wound up gunning down a village full of women and children. Kerrey, along with members of his team, did not speak publicly about the event for many years afterwards. But when it did come out, the former governor did not deny the story. He came out and painstakingly explained what had happened and including how the women and children had been murdered. Some argued that he gave the order, while a member of his own unit said that is not the case, but indeed he did not use the power he had to put a stop to it.

The long term result of this horrible event is that today Kerrey is staunch critic of any governing official of any party that speaks of going to war as an acceptable approach to handling disagreements between nations. He seems to take any and every opportunity to remind us that military action means terrible things for all sides, the civilians and soldiers who lose their lives or are forever scarred by what they experience.  The cost, and not just in the money sense of the term, of war.

This comes as nowadays so many voices, especially in positions of power, talk about going to war with a nation like Iran, as if it is an option to be used within the foreseeable future. Like choosing something to eat off a menu, they talk about “options on a table” and “having no choice.”  What I find admirable about Kerrey is that here we have someone who has carried out war. He has done horrible things based on strategies and what some see as “acceptable” means to solve  problems.  Yet all these other powerful people, who’ve never lived the reality of being a soldier or a citizen who’s home is under attack, they will claim they know what is best and what the risks are, and that war is still something they will use when they feel its necessary.

Myself I’ve never been a soldier, a victim of war, or a politician. So I listen to someone like Kerrey who speaks from experience and is honest about things that are more complicated and horrible than I could ever imagine.  Those aspects of war that few people can handle really talking about, much less fix in its aftermath.