Here Til Its Gone 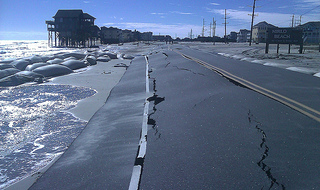 I’m sure many of you, like myself, have spent time over the past years watching either a TV series or a film involving an end of the world type scenario where our systems fail and people have to cope with the new reality. There is this mix of fascination with the possibility and concern with reality, that seems to be one reason why we watch those psy-fi dramas.

Here on the podcast, we have had guests who explain how in real life, system failure happens and can happen at an even greater level than we have seen so far.  But when a major disaster hits and the possibility becomes a reality, even on a small-temporary level, the connection is seldom made that in fact, it would not take much to shut down the infrastructure that we are so accustomed to, and very little is being done to improve those structures.

Rare is the city or rural area where new drainage or power capacity is installed. De-centralized power generation continues to be a small movement with numerous obstacles to keep it from expanding. Services get bought, sold, and re-sold, prices go up, but few improvements get made. All sides claim a lack of funds and promise improvements for another day.

Instead of these more complicated and expensive discussions, most content spit out on the internet is about when its getting turned back on. Or, what political party will allegedly keep your house from being washed to sea. Massive deficiencies in the working of our beloved infrastructure are ignored in favor of the quick fixes and consumer level complaints.

Meanwhile we watch the zombie apocalypse, the end of electricity, and entire nations becoming submerged under water on our screens. Somehow, if its on a screen and the characters are good looking, its just a fun escape to help us ignore the fragile, rotting system beneath our feet.