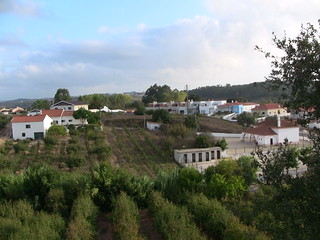 I’ve spent the better part of this summer with senior citizens, especially those living in small town Portugal. They are the generation just barely hanging on, the same people who 20 years ago I would spend much of my summer with.  They were the farmers, the housewives, the seamstresses, and the factory workers. They raised children, they emigrated to countries where there was work and hope, and then they came home to live among their farms and friends for those golden years as they awaited visits from grandchildren and for life to carry on.

As decades flew by, these towns changed dramatically and perhaps the people did too.  Young people kept leaving, and old people kept getting older. The focus shifted to nearby cities and suddenly there were hardly any children in town.  The local school where my mother and so many other children studied, stands empty and closed as the regional government has decided there aren’t enough students. The ruins of houses I used to visit when I was a kid lay everywhere, with their collapsed roofs, broken windows and walls that have crumbled.  In the center of the village there are now only two buses per day to get you to the nearest towns, another sign of a culture that has embraced the car as the ONLY means of transportation, and a community that can hardly walk to the bus stop.

Some of the still mobile seniors still tend to their fields, watering their crops which is mostly just for home consumption.  Several middle aged farmers do the lion’s share of the work, growing pears and grapes, the inconsistent cash crops of the community. Their children go to school and vocational training, their interests lead them away from the farm, towards the much talked about better life that is assumed to exist beyond this dying town.  As days turn into weeks, another beloved member of the community passes away. Their land passes on to a child who lives far away. Their houses lay empty, some strong enough to resist the decay, others not so lucky.  Outside of town there are a few tourism projects that attract visitors with money; wine tourism, people seeking peace and quiet, and those who find the mountains and valleys of agricultural Portugal to be charming.  Inside of town, the mayor wonders out loud about what will happen to his shrinking population when the generation that built the town is completely gone, and then next generations have long moved away.

This story of one particular village that I have known all my life, repeats itself over and over in Portugal.  Cities get bigger. Villages die out.  The elderly disappear while the young follow the promise of a what some say is a better life. Ripe plums and peaches fall from abandoned groves to the point that it smells like wine in the afternoon heat. Down the main road a few minutes there’s a new giant super market chain store that has opened up, they’ve got a sale on peaches and plums.