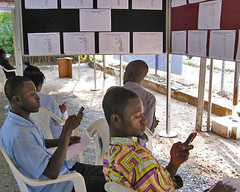 An African Election is a film that documents the struggle and achievements of the 2008 Ghanian elections.  4 years later, with the death President Atta Mills, the country is preparing to go back to the ballot box. And they’re not alone, throughout the continent of Africa, the wheels of democracy continue to turn, often in places you hear the least about in the international press.  Film maker Jarreth Merz is fascinated and inspired by the shining examples of Africa, and in their stories he see’s a chance to inspire, the spark that can light a fire and get new discussions started, large and small.  To do it, he’s putting together a mobile movie theater and bringing it all over Ghana and beyond. But he’s not doing it alone, besides his talented team, he’s putting out the call to people around the world who love democracy, Africa, aventure, and stories.. to get involved and get on board – it is time for A Political Safari.