No President is Sacred 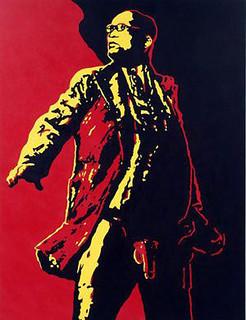 Last month there was a big to-do in South Africa over an art piece by Brett Murray, depicting president Jacob Zuma posing in a Lenin-style look to the future along with his penis being clearly visible.  Protesters have called it everything from disrespectful to racist, culminating in one enraged person attacking the artwork, damaging it, and closing the exhibition (or is it back already? I haven’t heard the latest)

Zuma has long been a contreversial figure, especially when it comes to sex and sexuality. He has had 6 wives and from them a grand total of 20 children. More infamously, he was acquitted of rape in 2005.  Throughout his political career in some way sex or sexuality has always been there, either in the background or the foreground. This would seem to be the grounds for which the artist chose to prominently include the president’s penis in the image.

Many disagree. They see these matters and personal and not subject to public criticism. They also feel the president of the nation deserves respect and not to be made a caricature of. But they don’t just disagree and write about it in the media and express their opinion in the many forums available to people today. They take it further and seek to have such images banned and follow that with all manner of accusation about the intentions of the artist.  Its a familiar theme in a world that has become very much about not just expressing an opinion, but stopping others from expressing their perhaps less popular opinion. Everyone is very busy being offended, and they demand someone else get in trouble for their alleged suffering.

Im neither South African nor a real artist, but I think there’s a global message in the events taking place around this work.  Therefore I’m making sure “The Spear” is available on this site… enjoy – or don’t.