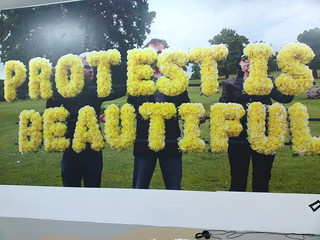 In my formidable years as a university student and an activist, I happily attended any and all protests I could. To this day you might catch me bragging about the effects of tear gas and the importance of having a gas mask. I tried, using what means were available to me, to carry on the tradition I learned about in history books and through personal stories from previous generations- those who had protested before me.  There is a great sense of pride and belonging that comes with engaging in such activities despite the occasional risks and tremendous odds one often faces. (Pro-East Timor Independence protests in the late 90’s were interesting but, admittedly, small)

On the other hand there is something that needs to be said about protests and carrying on some traditions that could prove extremely unpopular and unacceptable to others who are committed to fighting certain battles in a very particular way.  Ill make the general statement and then explain with some detail, hoping that those who read this understand that is just my observation with no intention to insult the integrity of dedicated activists out there.  – There are many protest tools that are touted as good options, that in fact accomplish hardly anything.  Among them, the modern day versions of strikes, boycotts, and petitions, all once very effective, all now very hard to quantify as successful.  Throughout Europe we have the tradition of the one day strike, where the next day they’re back on the job, and in the next salary negotiation they wind up losing something in a compromise; waiting out a strike becomes like waiting out a day or two of bad weather for the corporations involved.  Boycotts are constantly being declared on both offline and online forums, yet with few exceptions, no boycott of anything has been successful since the days of fighting apartheid in South Africa.  In the 90’s there was a Shell boycott I participated in.  In the early 2000’s, a boycott of CocaCola.  Decades later, neither of these companies skipped a beat and few people can remember the boycott.  Then there’s the online petition, which is so easy to pass around and so annoying in your inbox. Good intentioned petitions get signed and passed around, occasionally handed to elected officials, and then what happens? Perhaps a little rhetoric and some impotent promises by a bureaucrat who makes sure to file your petition in a virtual drawer next to all the other ones.

There is still people power — make no mistake. People can still make things happen. Occasionally they have over the years. But the routine ways we protest and express grievances, despite being noble and from a great tradition – if we’re really painfully honest with ourselves, a lot of it is symbolic and ineffective. The world has changed, the circumstances have changed, and the beautiful old methods do not always apply. And not being allowed to point this out, being discredited for breaking with the time honored formula, just perpetuates all the self-congratulating, guilt relieving activities that range from the same old tired calls for a general strike to the same old tired calls to share this petition on your Facebook.