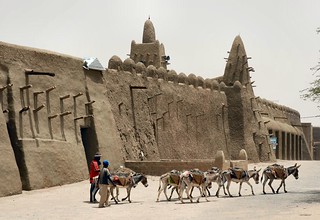 Over the past weeks the stories have trickled in of events unfolding in Mali. In a rush to fill a knowledge void, many of us do quick research using sources from the past and present regarding this West African nation which in the 1300’s was an empire that controlled the very lucrative precious resource trade in that region. As a standard liberal democracy of today, it was thought of as a good example of a nation. But just as we so often hear from around the world over the past decade, a coup emerges kicking out the president, and revealing that in fact – things are not ok in this ancient land. A chain-reaction of events kicks off, with not only a military group taking over the presidency, but a declaration of independence by an ethnic group in the north, which is of course followed by plentiful speculation about ties to terrorist organization and other possible horror stories.

The frequently repeated line in the press, when attempting to explain the frustration in the country and the reasons the north broke away- they felt ignored by the central government. Others, who support the coup, felt ignored as the government worked hard to appease international funding schemes and please foreign investors (particularly banks). Whether any of these reports are accurate or not, when it comes to describing how people feel in different parts of Mali – it is a familiar phrase – they felt ignored.

How often, throughout the world, despite all the communication and representation that is possible, do people say these same words when describing government. These systems are put in place, often by people who are long gone, and among their descendants – there are those who feel ignored or wronged somehow, by the very group that is supposed to address them. Some will point to economics. Some will point to regional conflicts and trauma. Then there’s religion and ethnicity. The list goes on and on when it comes to why. In a time where there is so much evidence of what we have in common across borders; needs, concerns, goals, maybe even values – we still manage to have groups who feel so ignored they would take up arms, put up borders, and make a new country despite all the hardships that may follow that decision.  How did we do that, as a species, as a planet, how did this almost conspiratorial scenario take shape over and over again in various forms across the world? We seem to lose, rather than gain, the ability to live together in the same area, country, or region, regardless of differences.

While research about the planet and our history can and does reveal so many commonalities between people, people have created a reality that manages to divide us up in ever increasing ways. As a once famous fictitious kid on a Baltimore street corner once stated, “World going one way, people another.”