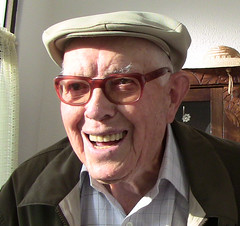 I can remember at the end of every summer when I was kid, having to wake up before the sun came up, to get a ride from the town’s lone taxi driver, who would take us on the long journey via the treacherous and twisty national roads of Portugal before the dawn of highways, to catch the plane back to New Jersey.  Right before my brother and I would get in the car, my grandparents would do the routine: wish us a good trip and ask us if we forgot anything. Then my grandmother, who even back then never had trouble speaking her mind, would speak a dramatic line like she was rehearsing for a very poor rendition of McBeth, “I probably won’t see you next year, as I’m old and I probably won’t survive til next summer.” This would be followed by us half-laughing at her over-dramatic delivery as we’re trying to focus on the journey ahead, and the traditional, “oh be quiet with that stuff” from my grandfather.  More than 20 years later, I’ve noticed my grandmother no longer says it, as I guess around the age of 90 it is simply implied.

The beauty of having grandparents around the age of 90, who are still of mostly sound mind, is that you can ask all the questions many people never get to.  Instead of learning about your family based on second or third hand stories, you have the very people who lived unbelievable moments and did the kind of hard work that seems impossible for any modern day work-from-anywhere self-employed person. You also get to watch them reflect on a world that they have observed for almost 100 years… even if they were too busy or napping for many of those years.  In an era where we stash our elderly out of sight and praise the virtues of being young, I’ve had the good fortune of never losing touch, and always being enlightened/entertained by one set of my grandparents.  Even better, throughout my life, I’ve gotten to help my grandfather in his orchards, listen to my grandmother in the kitchen, and laugh at the cold weather while sitting with them around a fireplace.

Not everyone gets to do this. That truth never eludes me. It is a rare treasure that no one is guaranteed and many are denied. I would call that one of the main reasons I would share stories about them, to share the wealth in some tiny and perhaps naive way.

Today my grandfather, José da Fonseca Jr. turned 91 years old. Whatever his age, however different my world might be from his, he is a part of everything I do and the way that I do it. Parabens Avô!