Only Near Death Experiences

My Malev-Hungarian airlines flights on the way back from Kosovo were heavily delayed, which seems like standard practice with that company. We are in what is supposed to be the last 30 minutes of this return flight to Amsterdam, its evening so there is nothing to be seen out the window, other then what seem to be clouds as we begin our decent. For some reason the decent is taking forever, 15 minutes, 30 minutes, we’re obviously circling the airport. No big deal I suppose, most passengers seem to know how this airline can be and are taking it in stride. Among the languages being spoken around the cabin I can clearly hear that Dutch is the dominant one; In front of me people are chatting casually, I get the feeling by their light conversation, they’ve just met on this flight. Most aren’t talking at all, just focused on the device or book in front of them. On my left there is an empty seat followed by a young gentleman occupying the window seat. He seems to be in his 20’s, of African descent, listening to music on those really high quality headphones I think P.Ditty produces. I haven’t said much to him all flight, other then offering to take his garbage and facilitating some communication between him and the flight attendant. My only excuse is that I’m tired, I fly constantly, I don’t have the energy to get chatty and make friends. I figure he doesn’t want to make friends either. So it goes -normally. 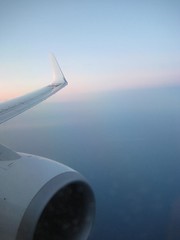 Then it happened. In what even now seems like it never happened, something that I can only describe as feeling like a giant ice-ball slams into the engine outside our window. This is immediately accompanied by a small ball of fire that seems to appear over the engine. This causes the plane to only momentarily shake a little, resulting in a natural sound of panic, fear, and surprise from most passengers on the left side of the plane. They then break into a loud whisper and murmurs, as everyone leans over trying to get a look at the wing. Then gentleman and I look out at the wing and can’t make out much of anything, not smoke, not damage, nothing. The plane seems to be flying normally, but the panic on board is thick. For the first time of the entire flight we’re looking at each other needing to say something, searching for some way to make sense of what has happened and what will happen. In an effort to find something to say, I assure him like some kind of plane expert, “If it is only one engine the plane can still land normally with one engine.” Neither of us seems comforted. Wiser voices among the passengers shush the panicking whispers, “calm, stay calm,” I hear in several languages. Amazingly things get quiet. -And then it happens.

From out of the cloud cover Amsterdam appears below us. I won’t bother to describe how I know, after a decade of flying to and from the city that I call home, I know when I see it from above at any time of day. Nervous people start making jokes and talking about life. I turn to the gentleman and ask him his name. We break into friendly conversation and I learn about his work as a professional soccer player in division I Romania, and his Angolan ancestry. We speak a bit of Portuguese and laugh a little about I don’t remember what. In that moment I’ve decided two things: 1- If something should happen I want to at least know my neighbor in these last minutes. 2- Probably nothing is going to happen but we both need to be distracted right now. Might seem dramatic but all around the plane I noticed the same thing happening, people who had barely spoken to each other suddenly asking each other questions and sharing thoughts and experiences. Some trying to calm or comfort their neighbors, others maybe thinking what Im thinking.

Minutes later the wheels touch down and despite the strangest thing Ive ever seen happen to a plane in mid air, there seems to be nothing out of the ordinary outside. But inside, something even more interesting is happening. Laughter and smiles, all around. I notice a group of 3 people who are not traveling together suddenly exchanging numbers. People are handing each other bags and patiently letting others go before them. Everyone is relieved and there is a euphoria that we rarely experience in our day to day. It would probably be psychologically exhausting if we did. But at the same time, to see such kindness and joy, I was left thinking about how good we can be to each other when we allow ourselves.

The gentleman and I walk towards the baggage check together. We’re still smiling about being safe on the ground, and swapping a few stories. I learn about his kids and his life here in Amsterdam. I tell him a bit more about mine. We part ways at the baggage carousel, in the same style many new friends did that night: “Great meeting you. Ill keep an eye out for your name on the internet. Guess we’ll never forget this flight eh? See around town.”

In the end it is a long story with no big ending. Even the pilot didn’t bother explaining what did happen. And I suppose we can’t live life the way that people who have had a near death (or at least what seems like near death) experience do. But in a world where most of the news and the stories we share describe how cruel people can be to one another, it is fantastic to live a moment where you see how fantastic we can be towards one another.