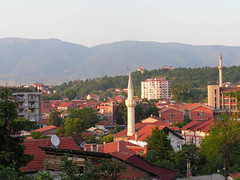 I arrive in Macedonia just in time to enjoy the last bits of sunlight as the airport taxi whirls into Skopje. In a nation of just over 2 million people, its capital is a tiny place with a lot of history. And who’s their favorite historical figure? – Their very own Alexander the Great. And just like I observed at Mongolia’s Chinggis Khaan airport last year, Macedonia has also named their “Alexander the Great Airport” after their most famous citizen of all time. Coincidentally just this summer I was in another important site connected to this same historical juggernaut – Herat, Afghanistan, city that Alexander ruled back somewhere around 330BC. Herat would eventually be destroyed by an invasion by none other then Chinggis Khaan. Another reminder of just how connected the world is.
Talk about connected, this land locked nation borders Kosovo, Albania, Bulgaria, Greece and Serbia. Looking at the map and discussing travel options with a taxi driver, I suddenly had the urge to pop over to Albania for a day, then up to Kosovo for another day, and on and on… with all these nations nearby, it becomes clear that Macedonia continues to be what it has historically been, a place where many roads lead.