Workers in Indonesia Rise Up Against Freeport

Here’s what we know: 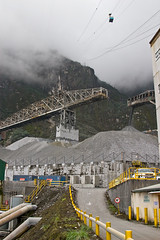 Freeport MacMoRan is the world’s lowest-cost copper producer and the largest gold producer in the world. Producer is a funny term, they pull it from the earth. I suppose the production label comes from everything they do to the stuff they take from the earth.. the processing.

The company is almost 100 years old with its headquarters in Arizona, but of course its operations are located all over the world.  Freeport operates the largest copper mine in the world, the Grasberg Mining Complex in West Papua, a province of Indonesia.

West Papua has long been the stage for conflict, where the Indonesian government uses whatever means at its disposal to keep the independence movement down. For many Papuan people the mine is a major part of that conflict, due to the massive environmental damage it causes on their territory, the lack of financial benefit or return to the region, and the use of notorious elements of the Indonesian Military to handle security. Since 2002 there have been several incidents involving the shooting deaths of workers at the plant.

For the past two months workers at the mine have been on strike, demanding better wages. According to Reuters, their current payrate is $1.5 to $3 an hour. They are now demanding that it be raised to $12.50 to $37 an hour.  Recent demonstrations by the workers have attracted crowds numbering around 8,000. According to the Jakarta Post, during one of those demonstrations police fired into the crowd and killed 2 workers.  The paper also reports that Freeport had been trying to fire all the workers and have them replaced, a tactic an Indonesian Minister said would be a violation of their labor laws.

Freeport is number 136 on the Forbes Fortune 500 list, with over $4 billion in profit for 2010. They have been heavily criticized by human rights organizations and corruption watchdogs for their payments to the Indonesian Government and the Military in an effort to maintain the status quo and quell labor disputes at their mine. The millions of dollars in lost revenue are often mentioned in the media for every day their mine is shut.  What does their copper go into? The list is massive and touches on many aspects of our everyday lives in the western world.