Not Yet A Report from OccupyAmsterdam 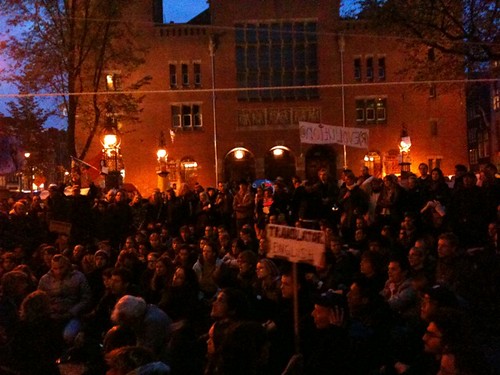 I’m reluctant to write anything yet about the #occupy movement, specifically my local occupy Amsterdam.  On the one hand it seems like everyone has already heard about the actions nearest to where they live, in the US, Europe, Asia, South America…. all over the world.   Which makes me think perhaps all the minds have already been made up. One role I don’t want to have when it comes to “occupy” is the one where I try to convince people of something and they try to argue counterpoints against me.  I don’t want to convince anyone to follow along, come on down, or anything like that.  Yet each day I still run into friends and strangers who have no idea what occupy wall street is, or here in our own city, what occupy Amsterdam is.  So I write, or at least, start to write, even if I’m not actually ready to write about everything I’ve seen and think from daily visits to this burgeoning community nestled on the former financial center of this city so famous for international trade.

We live in a world of categories. On websites. On forms. In our minds. You fit here, you fit there. Don’t fit, we’ll make you a new box if you’re lucky.  Even with alot of disorganization among us, we try to organize. You’re either this kind of person or that kind of person. Your action is either good or bad, in between is confusing and hard to process.  And when it comes to our protest activities, when it is about using or not using time, energy and resources towards a certain goal… the public tends to evaluate as quickly as possible and render their verdict if the cause is worth it.

Enter the occupy wall street actions- which are taking place all over the world. The average person looks, reads/watches briefly, and makes their decision.  Few visit, but many write or talk about it.  Based on images, sounds, text and other material coming from these epicenters, people make their judgement. They condemn, they approve, they ignore or something in between all these.  We still live in a world where you can ignore a lot and keep going about your life; war, corruption, injustice, the environment… few of these topics have stopped the general public, so it should come as no surprise that sustained demonstrations against the status quo would be any different.

And still they are out there, building something together. People ask “Are there still people down there?” They’d probably not believe me if I told them the truth – there are more everyday.