Gathering that Changes the World 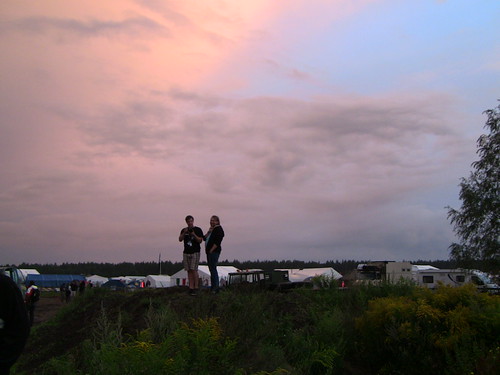 Half awake having just brushed my teeth, I stumbled back towards my tent, past a few retired green Mig-21 jetfighters when I heard the familiar sound of Portuguese being spoken.  I greeted the two gentlemen, and learned they were from a prestigious Portuguese newspaper, attending hacker camp to produce content about open leaks. Open Leaks is a new initiative for facilitating leaks online, created by a former frontman of wikileaks.  These two gentlemen were not alone in their quest, as the five days of lectures, workshops, parties, and general randomness went on, I met several mainstream journalists who told me of a similar goal, to write about leaks.  Each time I met such journalists, I was compelled to tell them about the scale and breadth of the 3,000+ community attending this event, as well as those who attend virtually.  I spoke about the people who build things, the people who take things apart, the people who travel around the world in an effort to use their knowledge to solve problems, and the people who stay home trying to do the same.  My big wish by doing so, was to make sure journalists understood that our world is not just about wikileaks and anonymous, though they have surely played a part. Our world is massive and more diverse then perhaps the media is prepared to understand.  Our interests and specialties are endless, and worthy of any article or report about this event.

Of course sometimes it is not for any one person to tell someone about this, as they have experience it for themselves.  But as the days went on I noticed them sitting with different people, observing different events and random occurrences that so often make up the average day at hacker camp.  Walk around and you might stumble upon someone building a tesla coil or a crepe machine, sit in one place and a 6 propellor drone might land next to you. Whatever you choose to do at camp, you would have to be tied up and wrapped in a sleeping bag to not experience a unique energy and overload of creativity.  Nothing is impossible here. Nothing is uninteresting here. Everyone has something to offer, whether they know it or not.

And so the Chaos Communication Camp 2011 came and went. Some never wanted it to end. Some needed it to end for their own health . It was exciting, it was tiring. It was inspiring, it was maddening.   Whoever you are, journalist or hacker, or even neither, if you were there, you lived one of the most amazing times of your life. Even if you haven’t realized it yet.