Almost one year since my first ever visit to Dubai last summer, I find myself here again for a few days in preparation of a new project in Afghanistan.  The details of the project I will leave to an upcoming post. The details of my days in Dubai is what I wish to talk about today. 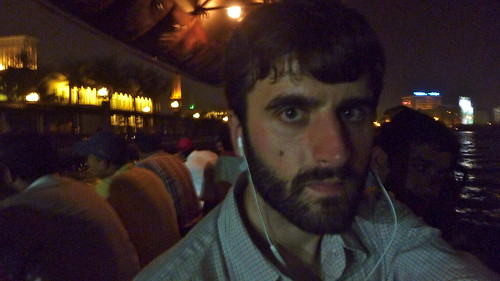 South Asian Gentlemen and I on the Dubai Creek

It has been done to death and you can include my name among them, writing about Dubai with disdain calling it a capitalist experiment gone bad or gone too far or without a soul.  Its easy to poke fun at a city that is so modern and busy yet so empty and transient.  See there I go, doing what the reporters who are here for 5 minutes tend to do.  Hard to resist.

To properly peel away the layers Dubai has it would take months if not years.  The people who could do a proper job explaining it all are too busy trying to earn a living and send it back to their loved ones in Pakistan. In India. In Afghanistan. In the Philippines. In Bangladesh.  Insert a nationality. The world is in Dubai. The emirates may claim it as their own and control things from a government level, but Dubai, no matter what they say, is firmly property of the world.

Somewhere along the way these polite gentleman in their eye-catching bright and clean white uniforms with that sweeping part that covers their head with the ever so well positioned black headband.. those gentleman did whatever they could to attract the world to their port city in the desert.  They knew they had oil but they also knew that in this world, oil is not enough, so they sought to make something more. Tourism. Banking. Business.  In the process they needed a massive amount of help. So they invited workers from all over the world, especially their nearby neighbors in South Asia. And so they came, mostly on their own leaving families at home. To drive the taxi’s, cook the food, collect the garbage, pick a job… there are so many that they do.  In the course of 20 or so years… a port city with some oil reserves and a population of just over half a million, became an international economic engine of almost a million and a half.  The city few knew about, became a name everyone knows about, even if they’ve never set foot on UAE’s sun scorched soil.

“21 years I have been here sir,” my driver from Peshawar tells me as we sit in mid-day traffic, “back then there was nothing like this. Maybe one shopping mall, now we have too many. And these huge buildings and the hotels. Nothing like this.”  He sits in silence for a few minutes, cab drivers in Dubai will tell you of their lives, but they don’t like to carry on. Straight to the point: “I can never bring my family here. The money I make driving taxi could never pay rent for a family house. No no. I send some to my family and there we have a house. I even have enough to be a landlord of a second property. Here is just work. Its the only way.”  He goes on to talk about the violence and risks in Pakistan. He is upset and disillusioned with the politics and innocent people who lose their lives.  But bringing them to Dubai is not an option. 21 years and it is not an option. In effort to bring some positive energy back I ask him about Pakistan’s nature and beauty and his eyes light up as he describes all the lush countryside.

The next evening I’m in a trendy Thai restaurant in a residential neighborhood. The place is packed with locals, Indian and other South Asian accents all around. Surprisingly an Emirate man, in the signature white robe, sits with his family who seem themselves to be South Asian.  They’re posing for photos and passing around a cute little baby. Back at the hotel there’s a sign, Prom 2011, and all around me are Indian teenagers and all their drama.   Listening to their petty arguments and clever jokes, I could have been anywhere in Europe or North America hearing the exact same thing. High School in Dubai, here are the children of the people who are raising their families in this land where they are forever guests. What will become of them in the future?

Critics will point to the lack of rights. Even the abuse of guest workers. Even the term guest workers reminds us that these people from all over the world living and working here are never allowed to become citizens.  A sad fact for those who have toiled for so long and help make this city what it is everyday.  But putting that sadness aside, even potential power counts for something, so although the law may not be on their side, there is power in this massive population that call Dubai home and without their everyday contributions, this place would shut down.