Behind Walls in Jalalabad

“Has anyone NEVER flown on a helicopter before?” asks the tall, well armed soldier with an Australian flag sewn onto his flak jacket with oh so many extra banana clips in it. “We haven’t!” – my colleague and I are the only ones of the group of 5 to respond. “Oh,” he cracks a smile and his blue eyes light up, “You’re gonna love it! No worries!”  Not that we needed reassuring, but when you’ve just found out that your transport from the capital city the second largest city closer to the border with Pakistan is an old Russian Mi-8, being guided by guys who say “No worries mate” makes it all the more exciting. 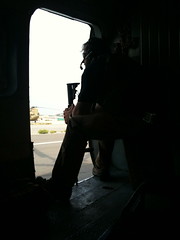 From the moment we step into the belly of the chopper I’m mesmerized by all the Russian writing and the obvious fact that since this thing was manufactured, back around 1961, very little seems to have changed.  “If I give a signal it means we’re going to land hard so just put your arms up and lean forward like this,” our easy going flight chief shows us, as his machine gun dangles at his side.  Minutes later we’re floating above the city and racing, as much as such relics can race, along the path to Jalalabad.

The 1.5 hour journey seems to last much longer, but we can’t be sure since we’re so busy taking photos and being amazed by this machine we’re sitting in and the changing landscape not so far beneath us.  After dropping off a VIP at some military outpost, we eventually find ourselves being dropped off inside yet another military outpost. As we step off the helicopter I see the sign: “Forward Operating Base Finley Shields”, a base I would later learn was named for two soldiers who died while on a mission in this area. We wander the lanes of the base slowly with our gear as the afternoon heat pounds on us, after alot of discussion with many layers of Afghan Army guards we eventually find our ride outside the gates.

The driver greets us, and we listen to our first long conversations in Pashto; new region, new language.  As we drive away from the base I’m impressed by the amount of businesses bustling with activity.  Mechanics, furniture makers, metal workers, food vendors, textiles, the list goes on and on.  The other common scenery, as we eventually pass through Jalalabad, are the schools and organizations with their elaborately painted signs, slogans, and murals outside their massive walls. Many are the world renowned names, but others appear to be simply local organizations with an education or community outreach focus.  The people along the road also strike me as interesting for one basic detail, no one here is wearing western clothes.  Unlike Kabul or Herat, the only other cities of Afghanistan that I know, in this Pashtun world, the shalwar kameez is the only outfit to be worn by men.  On the women’s side I see more burka’s then I’ve ever seen in any other town.  Just as everyone has tried to explain to me, this place has its very distinct differences that one can’t help but notice all the time.