Getting to know Fairphone 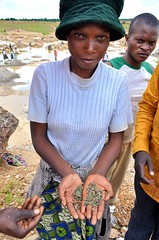 For the past few months I have been watching online and listening to conversations offline about the initiative by a group of people here in Amsterdam which looks at how mobile phones are made and how their production effects people and the environment around the world.  It is one of those difficult to address issues, because we are talking about a device that is so essential and so present in everyone’s life in almost every corner of the planet. And while we can be critical, perhaps, of the companies that produce them, we still need the device so sometimes the questions aren’t asked and the practices aren’t closely scrutinized.

The concerned group of people involved in Fairphone have decided to build the world’s first ethically produced phone, as they explain it:

Our aim of fairness is simple: to not harm man or nature in creating our phone. Not in transporting or producing it. And not in acquiring the raw materials for it.

As their first step in researching and beginning on the production process of the phone, they recently went to Congo (DRC) to meet with artisanal miners and learn about their working conditions, as well as what they would want in terms of fair treatment and payment as the source of the raw materials that eventually make the devices function.  In the process they also purchased raw cobalt and brought it back to the Netherlands to be used in their first prototype phones.  Thus completing the very basic but very little known step one of building our mobile phones, the mining of raw materials.

After having learned all about their initial efforts to both build a phone and shed light on an issue with global impact, I decided to get involved as a journalist and a concerned citizen/phone user. My aim is to follow this process and pass on information to the public, to stimulate conversations that could help on the road to more ethical production of the devices we love and use so much.

More information and reporting to come. This was only my own journalistic step 1 towards getting to know fairphone and an industry that could use a good kick in the pants.