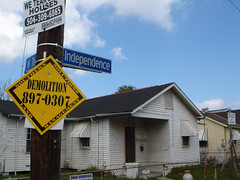 In post Katrina New Orleans, prisons and the justice system suffer from a long list of problems, many of which were there before the floods. They’re also the subject of a battle being fought by community leaders to change and fix how crime is addressed in a city fighting to rise again.

My guest for this podcast is Jordan Flaherty, a journalist and community organizer based in New Orleans, where he works on an impressive list of social issues. His book, Floodlines: Community and Resistance from Katrina to the Jena 6 focuses on the struggle of people in New Orleans, the stories of community and culture that do not often reach the mainstream media.