I’ve never been to a court house in the Netherlands, in my 9 years in this country, somehow I never had cause to enter one. After weaving through some of the plethora of government buildings one can find in the Hague, I somehow managed to find the courthouse, though I was somewhat surprised there was no crowd out front. Considering the importance of the case, which features an art student being sued by a multinational corporation for depicting their product in her art, I figured there would be at least a dozen people holding signs outside in support. Silly me, too many hollywood films with people behind police barricades in front of ye olde city courthouse. 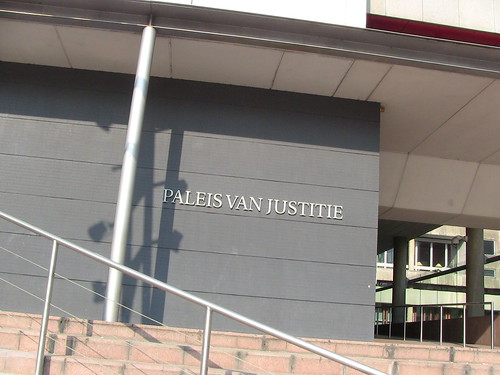 Court House in the Hague

I waltzed my way in and navigated my way through very modern hallways, past doors A through G, until I found my destination, court room H. A uniformed cop sat outside the door, the lonely figure in the hallway, fiddling with his phone in silence. I asked if I could go in and he gave a nonchalant nod. As I carefully opened the door I found myself in the audience, creeping quietly to find a seat, being noticed by all among the 15 to 20 people in attendance. I choose a spot by some people scribbling in notepads, “how old fashioned and quaint” I thought to myself in a condescending technologist tone. I looked forward and studied the figures in the front of the medium sized room, 2 judge looking people behind the big desk facing me, 2 lawyers dressed in black robes, one woman standing at the little microphone going over what seems to be a prewritten text, a young bearded man to her left going through pages of notes. Just next to them I see the long blonde hair and nervous look of who I immediately recognize as Nadia Plesner. She looks sad, which is not a surprise considering the magnitude of damages (5,000€ per day since January) she faces. As I look on the left side of the room, opposite the defence, I see the profile of what looks like a very shrewd legal mind, the Louis Vuitton lawyer. Close behind him sit 4 to 5 extremely well dressed, prim and proper individuals. Behind them two ladies are gabbing away into small microphones, I recognize what has to be simultaneous French translation, I presume, for the people back at the home office. The rest of the audience sits quietly, an assorted crew of concerned faces, occasionally shaking their head in disagreement or agreement with a statement that is made up front. Many are wearing little hand written pins with slogans about supporting art, supporting Nadia, and urging “Louis” to lighten up. And finally I notice there behind all of us, taking up the entire back wall of the court room is the subject of all this activity… the painting – Darfurnica.

I happen to be sitting right in front of the image of the boy holding the chihuahua and the luxurious handbag, which I now know is a Louis Vuitton bag. He’s decked out like Paris Hilton, while all around him are conflicting symbols of death and horror in Darfur, and Hollywood gossip-news-images of the rich and famous. In between are images of influential politicians with some role in what happens or does not happen in Sudan. Above it all, the sun, just like in Picasso’s Guernica, only instead of a lightbulb inside the sun, it is the logo of Petro-China, the oil company with the most investment in Sudan.

Just when I thought it wouldn’t get too exciting and that perhaps this would all be very routine until the judge finally makes a decision, the Vuitton lawyer gets his 20 minutes. Pacing around his little podium area, often with his arms folded, with a booming voice he presented a story filled with drama, conspiracies, and even some stern looks-jabs at the “media” in the room . Looking at the judge, even he seemed half fascinated and half bored with the extent to which events can be dramatized.

After long back and forth presentations and a few heated moments (more than 2 hours later), court is adjourned. It is hard to tell what the judge is thinking, but he’s giving both sides a critical look and has reprimanded them all at different times. As everyone files out into the hall, Nadia stays in the courtroom to do an interview with the big Dutch news program. Outside the Vuitton friends are huddled with the lawyer, they’re discussing where to get some drinks before some of them fly off to wherever it is they live. They’re confident but they keep it to themselves, glancing only occasionally at the young people adorned with pins, chatting only a few steps away.

As the corporate lawyer, now dressed in a very nice suit, walks towards the exit, he passes one of the girls with supportive pins. “May I have one as well, I think these are lovely…”, the somewhat surprised and nervous girl takes a step back and holds her bag of pins close.. “No, these are for those who support Nadia. Therefore not you. I think it wouldn’t be right.” Realizing the moment has passed, the lawyer shakes it off like he was only kidding, and walks out the door.