Voices of Resistance in Libya

Sometimes you’re reading a book, attending a lecture, watching a film, or listening to an interview and a voice grabs you.  The story grabs you.  The combination of the story, the voice, and some unknown, undetectable qualities grab hold of you and they shake you somehow.  You may have been paying attention, but now you’re really paying attention.  You may have cared, but now you’re passionate. You may have had ideas, but you’re inspired. 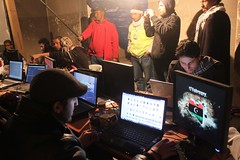 Sarah Abdurrahman is one of those determined, inspired, and modest voices that pulled me into her world recently. A producer for On The Media, she has been heavily involved as a Libyan-American activist with the Feb 17th voices movement, or as properly known on twitter: @feb17voices. This group of people, including Sarah, are doing what they can to get real information about what is going on around Libya during this critical time.  Its obviously no easy task and there is great risk for those on the ground, not to mention the fear of not succeeding that many have struggled with even before this amazing uprising.

In one poignient moment while being interviewed, Sarah speaks about her father, who decades ago was doing the exact same type of work only with different technology. She speaks about how the older generation has fought and feel that disillusioned after having not succeeded back then. She wants them to know their struggle is part of this struggle. She wants them to know what anyone who fights in this life for a better world wants to know: that they didn’t do so for nothing. That their lives have had purpose, and they are appreciated, and directly connected to everything happening now.

Do yourself a favor, be open to inspiration. Listen yourself to the fantastic Sarah Abdurrahman’s testimony. It won’t be the last time the world takes notice of her.