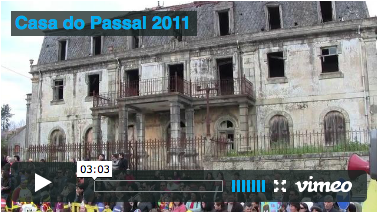 Artistides de Sousa Mendes saved the lives of over 30,000 people in Southern France in 1940. He did so in defiance of orders from the Portuguese Dictator who in turn disgraced him and blacklisted him, eventually leaving him in poverty. This included the loss of Casa do Passal his iconic family home in Cabanas de Viriato.

Only decades later was his name restored and the story of his heroic deed recognized throughout the world. However at this very moment his magnificent home continues to be neglected and teeters on the brink of collapse, waiting for a plan to be approved and carried out, to restore it as a symbol and tribute to those in this world who don’t just follow orders and who take action to help others regardless of the risk to themselves.

I had a chance to visit Casa do Passal during Carnaval in Cabanas over the past few days.  The following video contains moments from that visit.