“I was here til 4am this morning, one of the stove’s was acting up” Jorge points to the extremely long 2 story orange brick building in front of us.  As he slides back a massive rust colored door he tells us to step inside and immediately our lungs are filled with the cozy smell of burning saw dust.  It feels like a cross between a giant bakery and a disturbing dream, with the bright Portuguese sun filtering in through the diffused windows, the numerous stoves used for heating this huge space, and all over the floor like a moving ocean of yellow,  thousands of baby chicks are heading our way.  Actually they’re heading in every which way as if they have so much energy they need to move as often as possible. Elsewhere against the walls and nearer to the stove hundreds of chicks pack themselves into one giant mass as if they’re trying to stay as close together as possible. Some even seem to be forming some kind of chicken pyramid as a game.  Besides the smell that makes you oddly comfortable, the sounds are this constant, though not deafening, it’s a chirping combined with traditional Portuguese folklore coming from a radio. At first I thought the music was for the chicks, they seemed to move to and fro depending on the rhythm, but Jorge crushes my theory about chicks and music “oh that’s just for me, I like having music on.” I tell him I think the chicks like it. He shoots me a look of possibility -maybe they do. 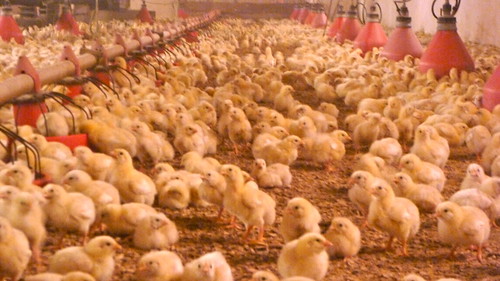 Spending time with the chicks

“By tonight this entire floor will be covered, they will move around and take over even more” I look left and right and notice the long pipeline that connects food and water, then there are the pillar-stoves every few steps that seem to be almost all generating warmth.  Jorge watches me take pictures, he seems to understand how beautiful this workplace of his can be, he talks about how he usually starts out on the first day and how he gradually moves through the building making space for more chicks.  “So last night one of the stoves went out, I had to be here to make sure the temperature stayed right.. if anything goes wrong.. It will cost me dearly.”  Indeed I can only imagine as I stand there in a sea of yellow, that this is not a labor of love, but in fact his business.. and making sure these little guys live.. is tantamount to doing good business.

“Can you check the temperature remotely, like through a computer” I ask, trying to find some hope for a social life for someone in such a sensitive line of work. – Jorge seems to only hear the beginning of my question, “Oh I had a machine that would regulate the temperature.. a sort of thermostat that I could set to maintain the warmth that they need…. but it broke.. and the repairs and problems ended up costing me 2,000 euro so I gave up on it.” He takes us outside and in the open drunk of a rusting little toyota van is the small german engine, on top of a rusting pile of what looks like might have once been parts for a time saving innovation.

“Some months in the winter especially, when its too cold, I shut the place down.  This year I shut down in December and I just started again a few weeks ago… its just too expensive to keep this place heated when the weather doesn’t cooperate.” I ask him how the last years have been and he indicates he has shut down at least one month every year for the past 3+ years.  “I also shut down for 15 days in the summer last year.” he half smiles. I presumed he was talking about a vacation and didn’t press the issue to not look like I missed his joke.

When I met Jorge during Carnival the day before, he was wearing neat clothes and a smile, with his wife by his side greeting what seemed to be the entire town.  Hearing I was a visiting journalist, he immediately invited me to come see his work. It wasn’t an overconfident invitation, it had the tone of a man who knows not everyone out there knows or see’s what he does on a regular basis. “I had to sleep there last night… had to make sure the little one’s made it through the night.. otherwise we’d be in trouble.” He explained this story to every neighbor that walked up to him and asked how he has been doing.  It was like listening to a doctor who had to stay late at the hospital last night.  Everyone responded with a look of respect for the good doctor.