In late 2001 I moved to Lisbon, Portugal in search of new adventures, a stronger connection to my roots, and to basically roll the dice and see where life would take me.  Like many children of Portuguese parents who return to Portugal in search of work, I ended up an English teacher at a large corporate school outside Lisbon.  This particular area was also where many multinational corporations, embassies, and comfortable retirees were located.  These were the sources of the often entertaining and very interesting students that sat in my classes.

One particular gentleman came to my attention when several other teachers told me there was a middle eastern man who spoke no English and no Portuguese and was therefore very hard to communicate with. I was immediately curious about both the person and the challenge.  For several months I’d also been privately and rather lazily been learning to write Arabic letters, I wondered if this might not be a chance to get some critique of my work.

The day came where I saw Sadiq* on my roster, he was going to be a student in my little class.  In that tiny glass walled room we went through the usual lesson and as others had warned me, he couldn’t follow much compared to other students.  I did what I could to communicate and one point I tried to use French which, to his great pleasure, worked!  As class ended Sadiq seemed to light up as he explained that he is Libyan and he works at the embassy but that he speaks neither Portuguese nor English.  He’s pleased I speak French and asks me some questions he wasn’t able to ask earlier about the lesson. After that I decided to further break some ice by asking him what he thinks of my notebook filled with Arabic letters and words that a toddler could probably write with ease.  He laughs. He points to the page and he points to me and in his limited engish he happily exclaims “you?” Yes. Me. 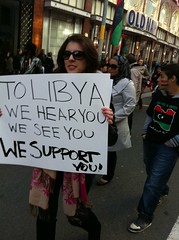 In the months that followed that meeting Sadiq’s English progressed to a very encouraging level. We no longer used French and he would even write up some short Arabic exercises for me to try.  On the occasions where I would be taking a break in the lounge he would sit next to me and talk about how things work in Libya.  He knew I was curious, from the climate to the traditions, he always seemed to have something new to explain.  One memorable time he joined me sitting with a female colleague who had just been outside smoking. He seemed concerned and went on to explain in his English “In Libya, women no smoke. She is beautiful, she is strong, and she doesn’t put terrible things in her body.” My colleague was of course not impressed and replied, “What about men, it is ok for men?” Sadiq frowned and said “Men are terrible and dirty, so they do these things.”  The answer wasn’t great by many standards, but as always I appreciated Sadiq speaking from the heart and showing me what I imagined others might say if I were sitting in Tripoli.

Strangely enough for the next months Sadiq would often invite me to embassy parties and cultural events. I would be introduced as “the professor” and the consulate officials of Algeria or Tunisia would greet me warmly every time.  On occasion there would be an example of Libyan culture or folklore on display and Sadiq would walk me through each item and each tradition. I’d leave the events with my head filled with stories told in broken english and pamphlets about how the Libyan economy works.

One day at an event there were copies of Gaddafi’s infamous little green book, which made me laugh as I thought about Mao’s little red book.  Sadiq asked if I wanted one, but he didn’t have a kind word to say about it. He immediately moved on to a book of photos about Libya. He proudly pointed to the cityscape of Tripoli, the beautiful coastline, images of large scale agriculture.  He was extra adamant about a photo of what I think was a female police officer, I remember him saying “In Libya, Mark, woman can do everything. Not like other places where they don’t let.” I was still processing that moment when he turned to the last photo which showed Gaddafi reviewing a military parade with  an array of rocket launchers and tanks. After so many pages of enthusiastic description he pointed and said “this is not so nice. I don’t like this,” and closed the book with some disappointment.

I never asked more about the government and how he felt about it.  The country he taught me about was filled with great stories and great beauty.  Indeed I decided for myself that as a Libyan in that era it might be  safer to avoid or ignore the government and focus on the beautiful things as much as possible.

In the fall of 2002 I left Lisbon for Amsterdam, but I would return for occasional visits and meet him for tea. Eventually he mentioned being recalled to Libya and realized I would probably never see him again.  He insisted that one day I would come visit his country and he would be my host.  He told me about his wife and children waiting for him back home.

That was over 6 years ago.  Today we sit home and we watch some kind of revolution happening in Libya. 40 years of a mentally disturbed dictator are not totally over yet and the trauma will last far beyond his days.  I watch the videos and the photos of street battles and I wonder how Sadiq and his family are doing. I hope they are safe. I hope they have a better future ahead of them.  Who knows, maybe years from now you’ll be reading on this site about my reunion with Sadiq at Liberation Square in Tripoli.