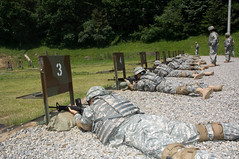 A growing number of women have, according to the military, died in non-combat situations. When grieving families ask for information about how their loved one died, they are frequently met with little detail, vague stories, and often kept from knowing what happened all together.

Investigative journalist John Lasker has looked into case after case of female military personel who have died non-combat deaths over the past few years. With each story he finds mounting evidence that there something more going on among the ranks of women in the US armed forces.

You can read his full article and help support his ongoing research on spot.us. On tomorrow’s edition on citizenreporter.org, John Lasker will be my guest and we will discuss the cases and his research into the larger issue of sexual violence against women in the military.