When looking critically at changes in democracy and politics around the world, much has been said about the personalization of politics. In many countries, where politics may have once been about the policies of a party and choosing between those parties at the ballot box, today it is increasingly all about the individual candidate.

Political posters feature huge images of the face of a candidate, either smiling or looking confident. Somewhere in smaller print is the party logo, in case you’re wondering about that.  In many municipalities in the US, where one party automatically dominates, it is all about the individual candidates.  But even on the highest levels, president, prime minister, these days we pay close attention to the policies, values, and personality of the individual, more so then the party. This has been referred to as the personalization of politics.

Yet right now there is another type of personal politics that has become a major force in many democracies thanks to the internet. It is the type of political relationship where the candidate or election official reacts and behaves based on your wishes.  Bill Clinton’s staff used to do phone surveys after his speeches and TV appearances, to get a feel for what works and doesn’t work for potential voters.  Adam Curtis laid out these and other activities in his fantastic documentary “The Century of the Self,” where he looks at how candidates would make changes to their policies and actions, based on what individuals wanted. 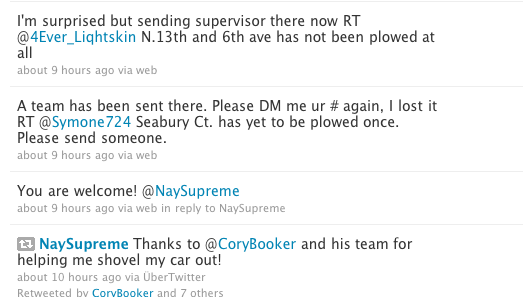 This might all sound well and good, people getting what they wish; a direct democracy perhaps?  If we look at the phenomenon of Mayors who make use of twitter on a regular basis to communicate with the public, we find what is very much another example of this personalized representation.  Many, including myself, have celebrated this development, as citizens are actively hearing about their election official’s daily activities, and providing real time feedback.

One of the greatest examples I follow has been my friend, Newark Mayor Cory Booker.  Now in his second term as Mayor, much has been documented about how this young Mayor takes a different approach to politics and leading a city.  Where some make speeches with their sleeves rolled up to look busy, Cory picks up the shovel during snow storms, pulls over drivers who litter, patrols the streets with citizens at night, and turns up more neighborhood parties than anyone in history.

It should be no surprise based on this description, that Mayor Booker is an avid twitter person. Tweeting a mix of inspiring quotes, personal observations, thank you’s, and daily city hall acitivies, he is not only widely followed but he also does a lot of following as well.  I should know, I’m one of those he follows.   As someone who keeps an eye on twitter and has the good nature to listen when citizens have a problem or concern, Cory receives many public twitter messages asking for help with issues in Newark.  From large to small problems, citizens tweet their Mayor about streetlights being out, meetings being held, abandoned lots that get filled with garbage, and most of all at this time of year – snow not being shoveled on their streets. Unlike his counterpart Mayor Bloomberg of (admittedly much larger) New York City, Cory does not simply post a phone number and tell his followers to use it, almost 100% of the time he responds with a “sending a crew over now” or “we’re on our way.”  Sure enough some hours later, you will be able to find a followup tweet from a citizen saying thank you or great job Mr. Mayor.  Occasionally it will be a followup complaint if the street in question isn’t clean yet, to which he still takes the consideration to tweet a very polite “be patient, we will get to you.”

Once again many observers will say – Fantastic! A modern Mayor using modern means to cut out the middleman and communicate openly with the public. Indeed I never miss a chance to tell people about the good deeds the Mayor of the city of my birth does using twitter.

Yet as more snow falls, as more problems appear for the city of Newark (or any city for that matter), and more people join twitter to tell the Mayor something directly, the more it becomes a legitimate question if this is really as fantastic as it first seemed. The individual might rejoice because their complaint or demand has been addressed almost immediately, but taken together, is the energy spent satisfying the individual well spent, among all the tasks the elected official must perform. Beyond that, how can the Mayor be sure that these issues tweeted to him are as deserving of his attention as say, some other city hall business? At some point even Mayor Booker himself tells people with demands to “be patient”.

Naturally the work of the Mayor is more often in city hall and not on twitter, the responsibilities people entrusted him with by electing him to the office.  Much of that work, as long has been true, occurs in the offline world, and sometimes unavoidably, out of the site of the general public.  Citizens of course see and live the results of the Mayor’s work over time, which always results in approval, disapproval, or something in between.

The main question here is: Does this style of leadership, elected leadership directly active on twitter, signal something positive in the long run? Is it a breakthru in the practice of addressing the needs and concerns of citizens? Or at some point will it just be the individual speaking only for an immediate and personal problem, at the expense of the greater good.

Postscript: Mayor Booker became the focus of this post which I actually wanted to be about the bigger picture of politics and twitter. I know for a fact he does tons more offline and online to hear from citizens directly and man oh man do I admire him for that.