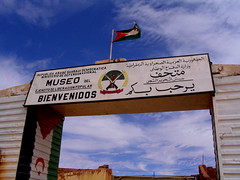 In the quest to learn more about Western Sahara and how people in that region are living, I have begun reading through human rights reports from refugee camps.  Specifically the camps in Tindouf Province, Algeria, where Human Rights Watch did extensive interviewing and research into the living conditions for Sahrawi refugees living there.  The total amount of people living in the Tindouf camp is disputed between the various stake holders and the UN, but most numbers hover around 100,000 people.

The particular section that caused controversy and anger when it was released back in 2008, is the one focused on slavery. Although authorities  vehemently deny that there is any sort of slavery going on at the camp, Human Rights Watch interviews featured in that document indicate that in fact there were cases where black skinned Sahrawis were owned by other Sahrawis.  This ownership is not the kind where one has to work for the owner (although forced domestic labor only ended in 1978), but it does involve all females having to get permission for their owners in order to marry. Without this permission no judge or marriage efficient will marry them, regardless if there is permission from the actual father or mother.

There were also reports that slave families have, in some cases, been able to obtain an official agreement or document confirming an end to the relationship to their owner. A sort of officially recognized end to their slavery.  Again, in response to such testimony back in 2008, authorities (known as the Polisario) deny such a document exists, and repeatedly deny any modern day forms of slavery in the refugee camps.

Another piece of the Western Sahara puzzle. Although the report is already for than 2 years old, it barely saw the light of day in the major media outlets.