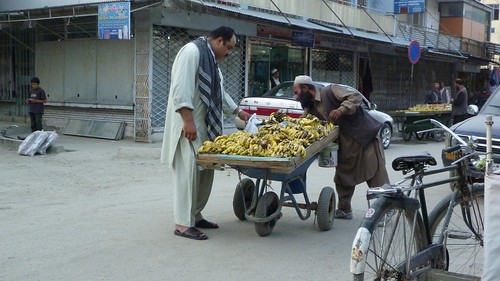 There is a term that is often thrown around in reference to how elections, in any nation around the world, should ideally be conducted: “free and fair”. When much of the world is watching an election and trying to gage if it is a good election, we look for evidence that people were able to vote without intimidation or any other undemocratic obstacle, and that the results of the vote were processed without irregularities. If this does not happen, then the reports start coming in, and we all sort of collectively decide that whatever elections a nation claims to have had, they were not up to the “free and fair” standard and therefore are not really a democracy.

Here in Afghanistan elections are only 2 weeks away. It is no secret that the government does not control the entire country and a war continues to be waged. Last month the announcement came that due to the strong risk of fraud and violence in certain regions, 900 polling stations would remain closed on election day. In a city like Kabul, Afghan National Police (ANP) run checkpoints throughout the city and there is the undertone of fear of being attacked or kidnapped by both foreign and local people. All-in-all, the task of holding an election in two weeks time is obviously going to be difficult and not without some problems.

The conclusion many observers in the media, governments, and perhaps you reading this right now, is that based on the aforementioned problems, the election is a failure before it even takes place. They take the standard of “free and fair” and they look at the poll closings, the threat of violence, and the recent attacks on political candidates, and they say – nope, Afghanistan’s election is a failure.

Yet the situation could also be looked at in another way. We could look at the 19,942 other polling stations that will be opened and look at the examples where people are voting when election day comes. We can look at the long list of 2,556 candidates from diverse backgrounds, including 405 women, running for parliament. Because looking at election with an interest in what goes right, not only what goes wrong, should also be part of the story that is Afghanistan today.

“Free and Fair” is certainly something anyone would want in an election, and if we were honest, we would admit that this doesn’t exist anywhere in the world. In the end we aim for an election that is as free and fair as possible within its context. The Afghan context is no doubt one of the most difficult in the world right now, but to be able to carry out an election, even one wrought with problems, should also be worth something on the road to stability.