This stretch of road, like so many in this city, is almost completely dark at night. No street light, no lights from houses (most of them are in ruins) and at this hour of night, no car headlights either.  One block down we can see the fancy supermarket which is conveniently open until midnight, always featuring an array of SUV’s of foreign contractors out front, and guarded by about 4 men in khaki fatigues wielding AK-47’s.

As I choose each step carefully to make sure I don’t step in a hole or an open gutter, I suddenly notice a steady noise in the darkness across the street.  It is the sound of a shovel and as my eyes adjust to the lack of light, I notice this person is working on the road. I scan the darkness and notice 2 or 3 more figures carrying tools and doing some kind of work on the road that looks like it might be paved in the next 24 hours.  These men work late at night in the dark…. I’m impressed they can see what they are doing.

Kabul is, for obvious reasons, not known for its night life and evening strolls.  But if you do dare take one you can watch the pomegranate stand guy close up his stand for the night. You can watch the bread store sweep up and take the last bread out of the window. You can experience the groups of Afghan police  attempting to communicate with you or talk about you in semi-English as you pass their roadblocks. And just when I thought no one else was out on the street, a gang of 5 children on rickety bicycles rolls by, just barely noticing me while negotiating the gigantic potholes in the road.

An Afghan friend, knowing that I’m new in town, takes us on a long drive around town… among the landmarks we see, the drab yet fascinating neighborhood built in the Soviet era, the incredibly fortified American military base that looks like something dreamed up in hollywood, and the most spectacular site of the night -the wedding centers- which look like Las Vegas casinos with extra christmas lights wrapped around them. Shining commercial temples against the backdrop of a town that goes quite dark and bleak at night.  No matter which direction the car turns, way up ahead in any direction are the mountains. Even at this hour, still towering over us with pockets of small white lights.

Kabul during the day is infamous for its chaos, a chaos that is often frustrating, but when you least expect it, a chaos that can somehow make you laugh or learn to let go and just let the city do what it needs to do. 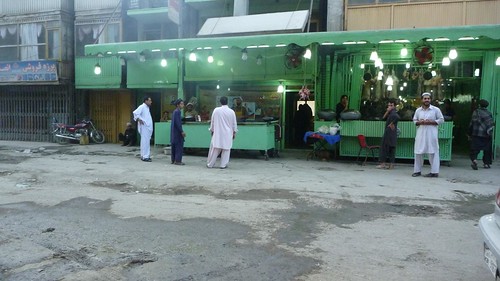 Food Venders prepare for the end of the fast.