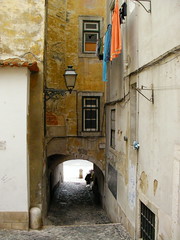 Walking around in 2010, it feels as though with every passing month more businesses are closing, more people are giving up on their deteriorating rental apartment, and that number must now be high above 4,000.

A recent piece written in El País talks about how Lisbon has lost 100,000 people per decade for the last 30 years.  The reasons they list include poor condition of public services like schools and hospitals, and the fact that property in Lisbon costs 3 times more than in surrounding municipalities. It is such factors that have landed both Lisboa and Portugal’s second city, Porto, in the EU’s top ten most quickly shrinking cities.

Speaking with neighbors and friends, you hear alot about these factors that led to the vast amounts of abandoned buildings.  You also hear the frustration that something more isn’t being done to renovate, restore, or above all – make use of these spaces somehow.  Through the eyes of someone who has seen the beauty of Amsterdam’s squat movement, or Copenhagen’s Christiania, there is a lack of creativity is this legendary capital city when it comes to reclaiming abandoned and forgotten spaces.

But what is being done on a small or large scale in Lisbon? And why can’t more be done? Why not get radical and yes, a little crazy, when it comes to policies regarding abandoned property and taking over such spaces from irresponsible and absentee owners?

These questions and more I intend to get answered. Stay tuned.