Vishwas Satgar on The World Cup 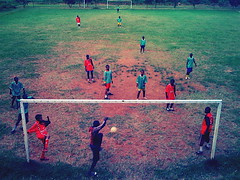 Not the World Cup in Rwanda photo by flickr member kigaliwire

Amidst my recent rush to dig for information about what effect world cups and high profile soccer tournaments have on nations, I almost missed a very valuable voice on a recent edition of Radio Open Source.

Who is Vishwas Satgar, I’ll use Chris’s description over at ROS:

Vishwas Satgar is a labor lawyer and leftwing activist, an insurgent ex-Secretary of the South African Communist Party who’s way out of alliance with the ANC on the uplift politics of the World Cup.

In this interesting interview, Satgar talks about the democratic deficit of this World Cup for his country.  He gets into the struggles that have intensified in the time leading up to the tournament, by social movements demanding the state meet long promised needs.  Specifically he talks about marches for Quality of Education, HIV-AIDS, and anti-privatization – among others, all which have held demonstrations during this high profile event.

Apparently at this very moment there is a national newspaper in South Africa that has gone to court to demand the government be transparent about the total cost of the World Cup. The total might turn out, when the information is finally released, to be around 5 billion dollars.  Beyond that, many cities including Johannesburg went way over budget and have spent themselves into massive debt.

There is much more to talk about and be heard in this interview, I recommend you give it a listen of you’re at all concerned about this topic of what does this tournament DO to or for a country.