“…if you live in a state institution and you’re diagnosed with schizophrenia in the United States in the present day, the chances are exponentially greater that you are going to be in a prison than in a hospital…” – Jonathan Metzl on All in the Mind. 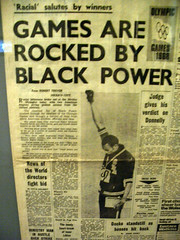 A recent edition of All in the Mind, ABC Radio National’s Mental Health radio program, looked at historical connections between protest and mental illness.  One of the main points of the program is to point out that historically, those active in protest movements of various kinds, have often been said to be or officially diagnosed as mentally ill. In this way their goals or grievances with social structures and practices are seen as not worthy of being taken seriously, as they are brought on by a sickness.

The main interviewee on the program was Associate Professor Jonathan Metzl, author of the book The Protest Psychosis: How Schizophrenia became a Black Disease, published by Beacon Books. Through his work Metzl explains a long list of cases where black people active in the civil rights struggle in the US were in incarcerated and while in prison diagnosed as schizophrenic or psychotic, then having their sentences extended and the array of treatments and medications expanded til the point that even if they had never been mentally ill before, they would become so.

From the era of slavery to the days of Malcolm X and Martin Luther King Jr, the discussion is a very interesting one that still has a big impact today in how we look at people in mental institutions, prison, and protest movements.