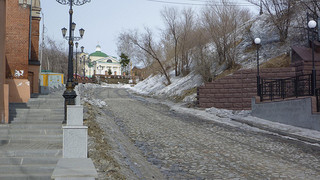 As we stroll through the snow-ice-slush filled streets of Tomsk, my new friends here have come to understand my penchant for abandoned places and forgotten history. It just so happens that Siberia has plenty of forgotten history and strange stories that could keep a citizen reporter like me busy for a long time. The trick is getting access when you’re an outsider and you don’t speak the language.

My favorite story so far is about a place only 7 kilometers outside of Tomsk, a town by the name of Seversk. Some may remember it from when it was called Tomsk-7, the town where 3 important nuclear reactors were located. What makes this town stand out more than the already impressive number of nuclear facilities it houses, is that during the Soviet Union the government decided for security purposes, the existence of these towns should be kept a secret, and access to these towns would be restricted. How do you restrict access to a town? They took a page from the medieval days of kings and kingdoms, they built a wall around it. To get in one must have official permission, or be a resident, and surely NOT be a foreigner.

With the fall of the Soviet Union in the beginning of the 1990’s, it was decided that these towns (most at least) should be able to choose if they want to stay closed off by walls and armed guards. Amazingly, many voted to stay that way. Why? Perhaps it was fear of the outside world. Fear that their lives would change in a way they never wanted. Whatever the reason, it is amazing to think that 7 km from where I sit at this very moment, there is a massive wall that surrounds a town of 100,000 people who in order to go to work in the morning, must show papers to military personnel at a checkpoint.

Take this already interesting situation and add the facts that 1 – Through nuclear disarmament deals between the US and Russia, 2 of Seversk’s reactors have been shut down, and 2 – in 1993 there was an explosion at one the facilities resulting in a radio active cloud – what you get is a very confusing and difficult situation within the walls of Seversk.  Or at least, that’s what I think when I consider potentially large unemployment plus an extreme environmental hazard, bottled up in one town.

Coming up next – A podcast about Seversk and life in a secret city. I can’t get inside, but I’m hoping to speak with someone who comes outside on a regular basis, maybe I’ll even get to go to the wall just to see it first-hand.