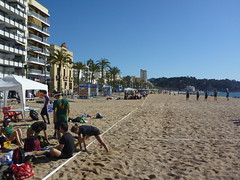 As the bus drove further and further out of Barcelona, I stared out the window, following the coastline as it occasionally disappeared behind a hill or houses.  I watched the Costa Brava unfold in front of me, just as the sun was going down at the end of a beautiful spring day in March.  Looking at the landscape on the way to Lloret, I found myself wondering if that beach town up ahead was it, hmm not this one, perhaps its the next one. After doing this several times, I dosed off.

Waking up not 20 minutes later, it was now clearly dark out and the bus was moving slowly along regular two lane roads.  The sign ahead read “Lloret de Mar – Centro” or something to that effect.  As I scanned the lights outside, I noted an abundance of neon signs: “Go-Go Dancers”, “Exotic Dancers”, and so on.  Welcome to the outskirts of Lloret, just a little tap from a city that when you arrive after nightfall, the atmosphere punches you in the face.

It punches you in the face with neon signs, blasting club music, and teenagers screaming, singing and chanting about anything and everything.  I’m making my way from the bus station to the beach by walking down what should be the glorious mainstreet of this vacation hotspot, where the elderly come to stroll leisurely during the day, and adolescents come to go wild, in many cases, for the first time ever away from home.

It’s a Sunday afternoon and we have a 3 hour break between games.  I walk away from the beach to buy some food supplies at a local supermarket, which happens to be on that infamous avenue with all the neon and vomit.  The crepe man is smiling as people queue up in front of him, he greets me and starts showing me how many industrial size containers of batter he made fresh this morning. “I make them fresh every morning” he assures me while opening many different cabinets behind him revealing tall white 5 liter jugs.  I start asking a bit more about his business when we’re suddenly interrupted by a loud cheering.  Behind me a bus had pulled up, the doors open and out pour dozens upon dozens of Portuguese teenagers, ripe from a 12 hour bus ride from Porto.  They look up and around as if they’ve landed on another planet, clinging to their hand luggage on wheels and travel pillows.  The crepe man motions towards them with his spatula: “New groups arriving everyday, twice a day… even more next week for Easter vacation, they come here in their last year of high school- thousands of them.” He says this with half a smile. For him it means more business.  But it also means tonight after he closes up, countless kids will smash bottles and urinate on the wall next to his crepe stand.

Its all in the game, people working in Lloret seem to say without saying it.  This is what their city does, as an infamous and celebrated destination for youth from Portugal, England, the Netherlands, etc.  They are there to cook the food, make the beds, run the nightclubs, and oh yeah – wash the streets every morning once the kids have passed out.  Just in time for the elderly who get up for their daily constitutional along the beach.

Lloret could be any spring break town in many countries around the world.  The place where the kids want to go, the place that although I may look upon with a sense of disgust, to them represents freedom and excitement.

On my way home from the obligatory post-frisbee party on my first night around 2am, I take the long way home, passing through some of Lloret’s narrow streets and alleys.  Weaving through the bodies that seem to be strewn around randomly, I run into a thick crowd of kids singing in Portuguese.  I take off my headphones to listen closely…. “Viva.. Viva Lloret” they sing.  Why would anyone feel like they needed to sing praises to the city they are in, late at night, I wondered.  Then I walked on past the kids making out here and there, and the groups of 6 and 8 kids laughing and walking arm-in-arm.  I realized right there was the inspiration for their songs of praise, a thank you to the place that they feel has given them what they wanted.