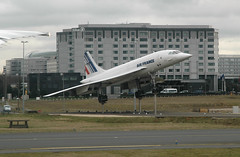 It was just over a week ago that I was catching a connecting flight out of Paris CDG. A massive airport serving the world as one would expect from such a renowned city.  As the plane taxied by various runways and hangars, I noticed the familiar site of the Concorde, stuffed and mounted near one of the terminals like a museum piece.  It struck me, although I remember when the planes were decomissioned in 2003 after 1 accident and big financial problems, that this plane on display like some relic of the past, is to this day the fastest commercial airliner to ever have functioned regularly. Hopping over the Atlantic at less then half the time of the average commercial planes. In essence I was looking at an advancement, the future of flight, only the future of flight was declared too expensive and abandoned.

This odd juxtaposition reminded me of other scenarios we see every day in this world: where we should be moving forward, planning for the future, daring to find solutions to problems and sometimes taking risks in order to achieve those solutions. Yet where we often don’t do it, or choose to stop short of actually trying something new or difficult in the name of playing it safe, not risking whatever it is we have now.

Some would call it, being realistic. Like when a nation announces that, despite the immenent and extreme damage we know the planet will suffer thanks to global warming that we helped cause, they won’t strive for big reductions in the production of green house gases. Instead making symbolic or more modest promises, which even if they are achieved would still fall short of what is needed to really make real progress in the struggle to slow if not hault the rising sea levels, the extreme melting of icecaps, etc.

This is of course what New York City Mike Bloomberg called it when he announced the city would not be implementing an aggressive campaign to reduce the amount of energy that large buildings use. He gave in to the pressure applied by building owners who were outraged because of the costs the reform would have involved. Once again, instead of taking the difficult path in order to move forward and implement some serious changes, building owners and Bloomberg decide its too risky.

Maybe they are being realistic, but I keep thinking of that Concorde, sitting there mounted in the take off position, a fitting metaphor for how this world functions, so much potential and ability, pointing towards the sky, but nailed to the ground.