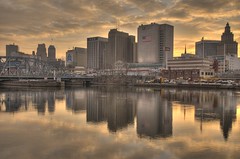 The story is not unique to Newark, all over the United States there are cities that are struggling. But what is unique is how citizens of Newark respond. Led by Newark Mayor Cory Booker, a man who loves his gadgets and social networking, groups of volunteers from all walks of life ride the streets of the city in packs of caravans, looking around to see what is going on, who needs help, and what doesn’t look right.  In cooperation with the police and department of public safety, the objective is to stem the violence, reduce crime, and show residents that people do care.  As the mayor himself said to me, it is also a chance for people from different backgrounds, races, religion, geographic locations, you name it – to meet each other and engage in this community activity together.

In this podcast I take you along on a night patrol with pack #2. Along the way you’ll hear stories, some serious, some not so serious, but each from a different volunteer with a unique connection to the city of Newark.  You will also hear from Cory himself, as he prepares us all before we hit the streets, and later on when he and I had a chance to talk about this initiative and how it has been received by the city.