What I Learned in Rostov 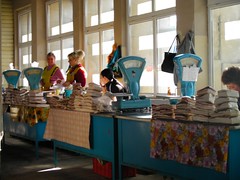 Greetings from my last night in Rostov-on-Don, where the N-Ost conference has just about wrapped up, and it has been a great success as far as I can tell. There is plenty to write about in a city that is so seldom heard about outside of Russia, yet has such personality. As its been a busy few days and I must already prepare to leave, I wanted to make a brief list of things I learned in and about Rostov which I thought you might find interesting: