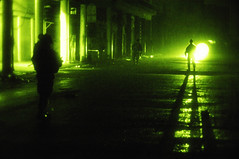 My good friend John of Americablog has been in Paris for the last few weeks and sent me a message today. The message contained excerpts from this article in the Guardian which tells about religious extremists in Iraq who troll gay websites and chat rooms seeking to identify gay Iraqi’s, track them down, and then torture or murder them.  They do this in the name of religion, citing the usual claims related to god and religious rules as justification for butchering men and women in ways that words cannot describe.

In his message John asked me if, among my many friends in the hacker community across the world, I might know some who could help expose these murderers who use computer skills to find their prey.  Although I do know many skilled individuals, I didn’t have a good answer for him. Is it possible that in a world where such a barberic group of killers exist, there might also be a group dedicated to human rights and the belief that none of us should ever be hunted for who we are, who could combat their activities?  Part of me thinks it is too TV, too Hollywood, that in the real world of post-Saddam Iraq, it is not possible to stop such horror.

Yet outside of the idea of stopping a group seeking to identify gay Iraqi’s, couldn’t those of us concerned with this issue help in other ways? The most basic – making sure there is information, readily available and being passed around any place where gay Iraqi’s could find it, on how to keep their identities safe.  On how to be vigilant for someone who is pretending to be something they are not. Although it might seem like common sense to some of us, it still seems to me one step we can take towards stopping fundamentalist monsters from committing atrocities.