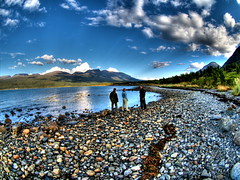 “Do you fear an arms race over the arctic?” the host of The Current Podcast asked an Inuit representative during a recent episode. The gentlemen spoke at length about the problems of the Inuit population in the high arctic and his concerns about the Canadian federal government doing military exercises in the arctic as opposed to giving much needed attention to public services and infrastructure.

Among the many things I learned while listening to this program, was the story of the Inuit High Arctic Relocation. I had never heard about the actions of the Canadian government during the cold war, relocating 87 Inuit people from northern Quebec. The government claimed, and still claims, that this was in order to alleviate problems Inuit had in northern Quebec by giving them a new and not over-populated region to practice their traditional living. However, as is illustrated in this program and other historical record, Canada was seeking to make settlements in the high arctic to prove that they own it and have people living there.

Many decades later, they’re still trying to prove it is theirs, and the Inuits still have problems stemming from government neglect.

Listen to the program to hear interesting details from a  compelling source.