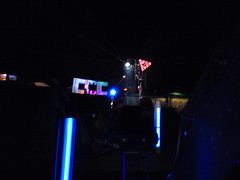 In many ways it is as if we never left. 2 years ago I sat at a picnic table under a tarp on the Polish-German border on the site of a former East German military base with a couple of thousand hackers and general purpose nerds.  2 years later here I sit, this time somewhere in the Netherlands, in the infamous Metalab tent filled with Vienna’s creative and hilarious geek crew.  To my left and right, tiny laptops connected to several layers of wires. In front of me, beyond a few more piles of wires and what looks like a virtual reality unit from the 80’s, several pale and half-asleep campers are tending to the Austrian breakfast.  It’s 12:36pm. 2007, 2009, its as if we just unpaused after the last camp.

It is always difficult to properly describe the scale and degree of amazing these gatherings are. I’ve only been a member of the community since 2005, but in these few years I’ve fallen in love with the attitude, atmosphere, and insanity of hacker camp and hacker gatherings in general. Yet when it comes up in conversation with those who have never experienced it, my words are met with giggles and eyes rolling, again- how to explain what happens here?

Last night as I stopped by the Italian embassy tent, I was greeted, as per tradition, by Italian hackers with grappa and cookies. Earlier they were surely cooking pasta in huge vats right next to their own huge pile of wires and laptops.  As I attempted to drink the powerful drink, cheering from the Austrian village caught my attention. Overhead, some kind of balloon creation consisting of mass quantities of glow sticks and a well designed frame powerful by 3 oversized helium balloons.  2 members of the lab climb atop the circa 1980’s Austria Telecom phonebooth to get a better vantage point for holding the rope the balloons are tethered to. In the semi-dark, hordes of hackers stop to cheer on the flying contraption, some calling on the rope holders to “set it free!”  Eventually nature takes control and the cord snaps, the flying spaghetti monster fights its way through a line of trees and floats up into the night sky like some kind of rainbow creature heading towards the moon. More cheers, campers move on to the next big tent and whatever project those people are working on.

Blinking lights, house music, machines copying themselves, French hackers making crepes, and the last remaining imaginary soviet republic with its own tent embassy, the list of creative or uncreative ideas is neverending here.  I spent much of my second day walking from tent to tent asking different groups about their healthcare system.  I ran into enthusiastic Scandinavians, a Brazilian sitting between tents on his laptop, a Slovak on his way to the bar, and a friendly Romanian gentleman who has found the perfect shade trees under which to position his tents.  As he and I discuss the healthcare system in Romania, hacker children splash around in the small lake around which the camp is set up.  Just behind us is the rather un-camp-like American house, where a group of American hackers are housed, I can hear their loud conversations about some technical topics I don’t understand.  I’m told the American hacker house makes good breakfasts, something to keep in mind for my last few days here.

It is now 1pm. The sun is blazing and even more people are filing into this tent. They’re coming to watch the replicator machine replicate itself. It is behind me and the constant buzz buzz sound of plastic being cut or drilled or whatever that thing does, it provides great writing music.  Time to load up on water, grab my mobile internet device and camera, and head out to see how camp looks after yet another night of beautiful madness.