“When I was a kid, we arrived at this border, on our way from Austria to Slovakia (Czechoslovakia) and we would have to stand at this border sometimes from 24 hours.? They would search every inch of our car, ask questions, and we would be here for ages.” 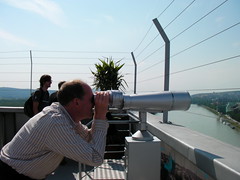 D tells me this as we drive back from a day trip to Austria today, as we drive past dozens of dusty, abandoned booths and buildings. The sign reads “Slovakia” with the EU blue around it, and the speed limit through the mess of former guard posts reads “40”.? In less then 2 minutes we’re back to regular speed, back in Slovakia, and over a border that when it comes down to it, no longer exists.? And although plenty of people young and old have stories of how the border crossing used to be, you can bet they would all think it insane to go back to the old way.

It is an amazing thing for a tourist like myself to stand high above the city of Bratislava and look across the Danube towards Austria. You look across this powerful creamy green river and before your eyes get to the border area, there is still several kilometers of Slovakia. Most of it is tree’s and fields. Tree’s and fields that only a couple of decades ago where a buffer zone between 2 highly armed empires, both of which were completely paranoid about one another. I see tree’s and fields, but some older Slovakians probably still see a buffer zone, probably worry about being shot if you find yourself strolling through that chunk of nature.

So whats the big deal bicyclemark? So what if one effect of the EU has been that a bunch of national borders are no longer as significant as they once were? To many who live this reality on a daily basis, they probably think it boring to hear this discussion again. Clearly I’m from out of town.

But when I think of what they’ve built on the Mexican-American border, a wall of cameras and guard towers complete with a volunteer militia that aim to round up anyone that dares cross. Or the Canadian-American border where people seeking to go from one country to to the other, countries that have so much in common, are harassed with questions and check points and background checks. Or perhaps more depressing is to think of places in the world where people die to defend a border, or die trying to cross it. So much blood spilled and so much energy wasted.

Maybe I’ll write a postcard to someone: “Greetings from Slovakia, there’s no border control with Austria anymore. Everyone here is still alive so far.”